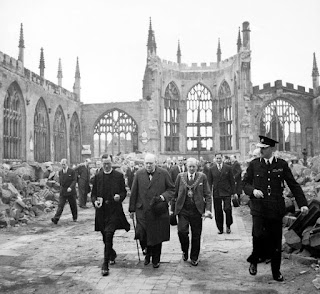 The German Luftwaffe bombed Coventry on November 14, 1940, destroying the Anglican Cathedral and the Cathedral is celebrating the 75th anniversary of that night of terror:

BBC Radio 4’s Sunday programme highlighted Coventry’s perspective on the subject of remembrance in a special feature broadcast on the morning of Remembrance Sunday, November 8th. You can listen to it here.

On the evening of Saturday 14th November, the city is planning to create a giant Human Chain of Peace and Light in the city centre finishing at the Cathedral. Each person attending will carry a light along the chain to symbolise communities joining together in a universal message of remembering the past but looking to the future. Join His Royal Highness The Duke of Kent KG GCMG GCVO ADC and listen to LocalVocals as they sing songs from the 40’s. Hear survivor stories and stand shoulder to shoulder with your neighbour and a host of VIPs to remember the Blitz. The event begins in the University Square at 6.30 pm. Bring your torch or mobile phone to light up the square at 7 pm.

The inspiration for the Human Chain comes from Dresden where a similar event takes place annually and attracts thousands of people from across the country.

The Blitz 75th Commemorations programme continues with a concert in the Cathedral at 7.30 pm on Saturday evening with the Saint Michael’s Singers performing Mozart’s Requiem and Solemn Vespers with the Parliament Choir and the English Symphony Orchestra. . . .

On the evening of Sunday 15th November, the Cathedral will be hosting a Civic Service of Commemorationat 7 pm. Everyone is invited to come and join in looking back to the events of 75 years ago in company with representatives from Coventry’s friends across the world – including nations with whom we were at war in 1940.

The destroyed Cathedral, dedicated to St. Michael the Archangel, was of course formerly a Catholic church, built in the 14th and 15th centuries. The first cathedral of Coventry was St. Mary's, a Benedictine Priory. One might note that Henry VIII destroyed St. Mary's in the 16th century (the only cathedral destroyed during the English Reformation) in the course of the Dissolution of the Monasteries--he had offered it to the people of Coventry for purchase, but they could not raise the funds, so he had it razed. The ruins are of course now a tourist site.

St. Mary's was founded in the 11th century and there's an intriguing historical connection:

Leofric, earl of Chester, and Godiva his wife founded the great Benedictine monastery of Coventry in 1043, it being consecrated on 4 October by Archbishop Eadsige. The church was dedicated to the honour of God and His Blessed Mother, and also of St. Peter the Apostle, and of the Holy Virgin St. Osburg and of All Saints. It was endowed by the founder with one-half of the town in which the monastery was situated, and with twenty-four lordships, fifteen of which were in this county, four in Leicestershire, two in Northamptonshire, and one each in Worcestershire, Gloucestershire, and Cheshire. Among the witnesses to this foundation charter were Edward the Confessor, the archbishop of Canterbury, the bishops of Worcester and Lichfield, the abbots of Winchcombe and Pershore, and the earls Godwin, Harold, Siward, and Ordgar. The king confirmed to this abbot and his successors sac and soc and toll and all other liberties.

St. Mary's Priory was surrendered to the Crown on January 15, 1539. St. Michael's Cathedral was rebuilt after the Blitz and was consecrated in 1962 with Benjamin Britten's War Requiem premiering. The War Requiem combines traditional parts of the Catholic Missa pro Defunctis with the poems of Wilfred Owen, a World War I poet. Sir Simon Rattle recorded it in 2013 with the Berlin Philharmonic.

Image credit: Winston Churchill visits the ruins of the Cathedral in 1941.
Posted by Stephanie A. Mann at 12:30 AM