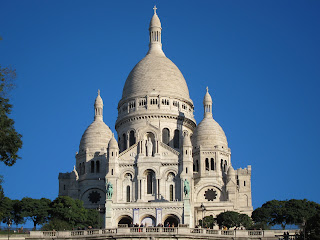 As I watched the confusing reports of the ISIS attacks on Paris Friday night I prayed for the people of Paris and the terror they were enduring. My sister had called me when the first reports came out because she knew that Mark and I love to visit Paris in November. As we discussed it I pointed out that we would likely not have been on the streets after dark, but who knows--during our last trip we stayed in an apartment in the 11th arrondisement (the center of last night's carnage).

ISIS has now spoken up and taken responsibility for these heinous attacks on ordinary people, enjoying dinner, a concert, a soccer game. They described Paris as "the carrier of the banner of the Cross in Europe". Would that it were so! Paris' laicite and official secularism cannot ignore, however, its rich Catholic Christian heritage. 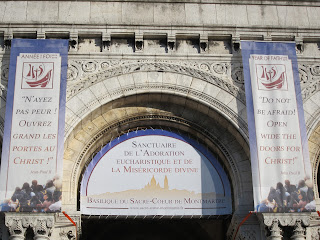 In October 2012 we visited the Basilica of Sacre Coeur on a chilly morning. It was during the year of Faith and the banners outside the shrine of Eucharistic Adoration and prayers for reparation proclaimed the words of Pope St. John Paul II: "Do Not Be Afraid! Open Wide the Doors to Christ!"

St. Joan of Arc and St. Louis of France for Paris! She helped defeat the English invaders of France while he fought to defend the shrines and Christians of the Holy Land. While the people of Paris mourn and heal and their government plans strategies to defeat their enemies, we pray for them and invoke their great patrons, including Saint Genevieve and Notre Dame! 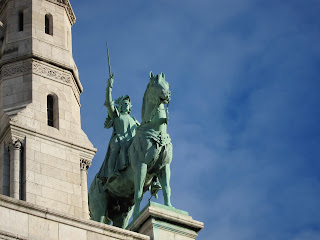 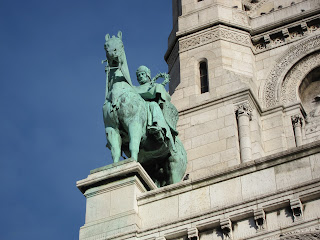