Remembrance Sunday and the Fallen 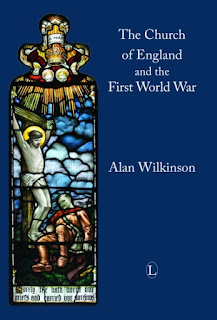 World War I revived prayer for the dead among Anglicans: the Prayer Book of 1928 included prayers for the dead in funeral services and a liturgy for All Souls Day on November 2. This is the current Collect:

Eternal God, our maker and redeemer,
grant us, with all the faithful departed,
the sure benefits of your Son’s saving passion
and glorious resurrection
that, in the last day,
when you gather up all things in Christ,
we may with them enjoy the fullness of your promises;
through Jesus Christ your Son our Lord,
who is alive and reigns with you,
in the unity of the Holy Spirit,
one God, now and for ever.

Alan Wilkinson notes in his 1978 book on how the Church of England responded to WWI that Cosmo Lang--a former Fellow of All Souls College in Oxford--preached about a new view of prayer for the dead as early as 1914. While he cited the abuses of Tetzel and the "chantry system", he noted that it is natural to pray for those who have died. When so many young men, sons, brothers, fiances, and relatives were dying for their country, it is hard not to pray for them to rest in heaven. As Wilkinson sums it up, "bereavement was sweeping away the latent Protestantism of the English people in this matter"--among Anglo-Catholics, Requiem Masses were celebrated.

The Church of England certainly did not restore the doctrine of Purgatory, a place of purgation from the attachment to sin and purification before entering eternal paradise, but prayer for the dead almost requires that there is some chance for final preparation after death. The saints in Heaven do not need our prayers; the damned in Hell cannot benefit from them.

The situation of each dead soldier's preparation for death by a holy life, balanced by his sacrifice for his country, raised many questions--would he go to heaven for dying for his country in spite of a sinful life? Did his sacrifice in war atone for personal sins? Wilkinson says that many felt uncomfortable with this "quasi-Islamic belief"--so people prayed for their beloved dead.
Posted by Stephanie A. Mann at 12:30 AM

Email ThisBlogThis!Share to TwitterShare to FacebookShare to Pinterest
Labels: All Souls Day, Archbishop of Canterbury, Poor Souls, Purgatory, the Church of England, World War I