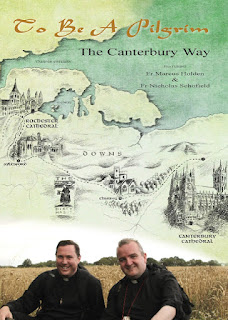 Two priests in England are leading a pilgrimage to Canterbury:

An ancient trail of pilgrimage runs through south-east England; a pathway along which so much of English identity converges. It is the way of St Thomas Becket, the martyr who stood up to a King and inspired Christendom. It is a route that drew countless pilgrims in ages past, captured the imagination of Chaucer and is reviving in our own time.

This film follows Fr Marcus Holden and Fr Nicholas Schofield as they journey from London to Canterbury. Along the way they discover the story of St Thomas and some fascinating traditions: the Rood of Boxley, the splendour of Rochester, the 'second Carmel' at Aylesford and many more.

By retracing the steps of the medieval pilgrims, this film draws out the rich Christian heritage of England and reflects on what it means 'To Be A Pilgrim.'

When I read The Canterbury Tales in a Catholic High School we certainly did not skip over the faults and foibles of the clergy as Chaucer depicts them. Only the Parson has any of the virtues of his office and vocation: the Monk, the Prioress, the Friar are each corrupt and venal in some way. But the Pardoner, who dispenses indulgences, is worst of all:

With him there rode a gentle PARDONER

Of Rouncivalle (comrades and friends they were),
Who'd come straight from the court of Rome.
And he Would loudly sing "Come hither, love, to me!"
The Summoner bore him a stiff bass staff;
No trumpet ever sounded so by half.
The Pardoner's hair was as yellow as wax,
But hung as smoothly as a hank of flax;
In little strands the locks ran from his head
Till over both his shoulders they were spread
And thinly lay, one here, another there.
In jolly spirit, he chose not to wear
His hood but kept it packed away.
He rode (Or so he thought) all in the latest mode;
But for a cap his long loose hair was bare.
Such glaring eyes he had, just like a hare!
A veronica was sewn upon his cap.
He had his bag before him in his lap,
Brimming with pardons hot from Rome.
He'd speak In voice as dainty as a goat's. From cheek
To cheek he had no beard and never would,
So smooth his face you'd think he'd shaved it good.
I think he was a gelding or a mare.
But speaking of his craft, Berwick to Ware
There was no pardoner could take his place.
For in his bag he had a pillowcase
That used to be, he said, Our Lady's veil;
He claimed he had a fragment of the sail
That took Saint Peter out upon the sea
Before Christ called him to his ministry;
He had a cross of latten set with stones,
And in a glass he had some old pig's bones;
And with these relics, when he saw at hand
A simple parson from the hinterland,
He'd make more money in one day alone
Than would the parson two months come and gone.
So he made apes, with all the tricks he'd do,
Of parson and of congregation too.
And yet I should conclude, for all his tactic,
In church he was a fine ecclesiastic,
So well he read a lesson or a story,
And best of all intoned the offertory.
For well he knew that when the song was sung,
He then must preach, and not with awkward tongue.
He knew how one gets silver from the crowd;
That's why he sang so merrily and loud.

The British Library has more information about the Pardoner's role.
Posted by Stephanie A. Mann at 12:30 AM