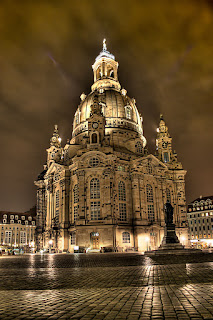 Julia M. Klein writes in The Wall Street Journal about the re-building of Dresden's "Church of Our Lady", the famous Lutheran church built on the site of a Catholic Romanesque church which had been built in the 12th century. I am interested in the article because Klein emphasizes that the church embraces history instead of trying to deny it; it was not rebuilt exactly as it was before World War II:

The architecture of contemporary German cities can inspire a trompe-l’oeil confusion of the old and the new. Leveled by Allied bombs during World War II, many picturesque town centers have since been meticulously rebuilt, with only their perfection signaling their inauthenticity. Dresden’s restored Frauenkirche, which on Oct. 30 marks the 10th anniversary of its consecration, has avoided this trap—by embracing rather than erasing history.

The Baroque, octagonal “Church of Our Lady,” where Johann Sebastian Bach once played the organ, has always been central to the city’s image. Designed by George Bähr and completed in 1743, the Lutheran church retained the name of the Gothic Catholic one it replaced. Its outstanding feature—a soaring, pillared dome nicknamed the “Stone Bell”—dominated the city’s skyline and symbolized its artistic splendor.

On Feb. 13, 1945, Dresden was firebombed by the Allies, and two days later the Frauenkirche collapsed. The destruction of Dresden became central to German postwar victimology and was memorialized by Kurt Vonnegut in his 1969 novel, “Slaughterhouse-Five.”

The church was rebuilt ten years ago and has a mission of providing, as the church's website notes, both warning and encouragement:

Klein provides some details about the "aspects of remembering, reconciliation and peace" built into the new church:

Meticulous as the reconstruction has been—the altar was almost entirely pieced together from shards of the original—there are deliberate reminders that this is not the prewar church. On the altar is a newly forged Cross of Nails, a link to a similar cross at the rebuilt cathedral in Coventry, England, destroyed by German bombers in 1940. The pillars alongside the altar, displaying wartime damage, are missing the angel-head carvings visible elsewhere.

The church’s old pinnacle cross, charred and twisted, sits in the south nave, where visitors may light a memorial candle and inscribe their thoughts. The gilded cross—an exact replica—that now crowns the bell tower was a gift from Britain, fashioned by Alan Smith, the son of one of the bombers of Dresden.

I was disappointed however to see this inaccuracy on the church's website when discussing the name Frauenkirche:

The name "Frauenkirche", which literally translates as "(Our) Lady's church", is by no means unusual: You will find a Frauenkirche or Liebfrauenkirche in around 100 cities throughout Germany, including Meißen, Munich, Nuremberg and Bremen.

They can also be found in other European countries such as Belgium or France, where they are called "Notre Dame", or "Our Lady", and refer to Mary, the mother of Jesus.

The original name of the Dresden Frauenkirche was ‘Unserer Lieben Frauen’, which dates back to the time the church was founded in the Middle Ages. The name was shortened over time to ‘Frauenkirche’ and even retained after the Reformation despite the fact that the Protestant Church knows no adoration of the Virgin Mary.

Thus, a "Frauenkirche" is a church that has been or is consecrated in honour of the Virgin Mary.

It is intriguing that they didn't change the name when they replaced the old Catholic Church, but I think the choice of the word "adoration" is unfortunate. Catholics don't adore the Virgin Mary, and Martin Luther certainly honored the Virgin Mary as the Mother of God and he upheld the doctrine of her Perpetual Virginity, but of course, he rejected any theology of her as a mediatrix of grace. This article provides some careful explanation.

Image credit: licensed for use under the Creative Commons Attribution-Share Alike 3.0 Unported license in Wikipedia commons.
Posted by Stephanie A. Mann at 12:30 AM