Mary I on the Son Rise Morning Show 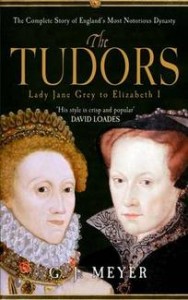 On this the 457th anniversary of her death in 1558, Matt Swaim and I will discuss on the Son Rise Morning Show (at about 7:45 a.m. Eastern/6:45 a.m. Central) the reign of Mary I, the first Queen Regnant of England and the only reigning Catholic Queen of England--there were Catholic consorts after her. Mary's reputation has undergone a change in the past five or so years. The sobriquet "Bloody Mary" is still common, and we certainly can't argue away almost 300 heretics and Protestants burned alive at the stake, but a more realistic view of religion in the 16th century has pointed out that whether the judgement of the government was heresy or treason, religious freedom did not exist in sixteenth century England.

G.J. Meyer's 2010 hardcover survey of the Tudor dynasty was re-issued in the U.K. as a two volume paperback with Henry VII and Henry VIII covered in the first volume and Edward VI through Elizabeth I in the second volume.

Meyer continues the re-evaluation of Mary I's reign in his book, noting that Mary's first Parliament reversed--except for the Dissolution of the Monasteries--all the Reformation legislation of Henry VIII and Edward VI's reign without much dissent at all. Parliament re-established the relationship between the Catholic Church in England and the Papacy and Mary gladly relinquished any claim to headship or governorship over the Church. Unlike her father, half-brother and half-sister, Mary did not want to rule the Church; she would not decide what orthodoxy and heresy were; that was up to the Church, not the State. He also regrets that the same Parliament revived the heresy laws in England--the State would assist the Church in examining, charging, and executing heretics.

In his first chapter on Elizabeth's reign, which begins at the end in March 1603, Meyer notes that the reigns of Mary and Elizabeth followed a similar pattern (the difference was of course duration): their reigns each began with enthusiastic welcome; they share a middle period of success and popularity; they both ended in exhaustion and disillusion. The crucial difference in Meyer's view is that Mary wanted to do more than survive: she wanted to achieve something:

No historian today could dispute that Mary was a capable and conscientious queen, or argue that her government killed or tortured or imprisoned as many people as Elizabeth's. She devoted herself to what she perceived (rightly or wrongly) to be the interests of her subjects, and she might have achieved her objectives if she had reigned even half as long as Elizabeth. The process of winnowing the facts has taken four centuries, but it is clear by now that Mary was the more ambitious of the sisters--that she aspired to much more than her own survival, certainly--and that the reason for her failure many be nothing more mysterious (or shameful) than the fact that at the time of her death she was 28 years younger than Elizabeth would be at hers.

Mary had aimed at the restoration of Catholicism in England and in her brief reign she had done much, with the aid of Reginald Cardinal Pole, the last Catholic Archbishop of Canterbury and his bishops, to restore the Church and even implement reforms in the Church. When she died on this day in 1558 she thought, because Elizabeth had sworn to her that she was a true Catholic, that her work in England would continue.

Like each of the Tudors before her, she would be betrayed by her successor. Henry VIII betrayed his father by placing glory and pleasure above statecraft and investment; Edward VI betrayed his father by destroying what was left of the structure of prayer for the dead, the communion of saints, and the sacramental order; Elizabeth betrayed Mary by lying to her about the one thing, except for the love of her father and mother, most dear to Mary: Jesus Christ and His Church. Mary had not betrayed Edward: he knew what she believed and what she would do--that's why he wanted Jane Grey Dudley to succeed him.
Posted by Stephanie A. Mann at 12:30 AM