July 1, 1616: A martyrdom in London during James I's reign was an event with international implications--the Spanish ambassadors were quite active around this time in pursuing pardons or even exile (knowing the priest would very likely return).

Blessed Thomas Maxfield was born in Stafford gaol, about 1590, martyred at Tyburn, London, Monday, 1 July, 1616. He was one of the younger sons of William Macclesfield of Chesterton and Maer and Aston, Staffordshire (a firm recusant, condemned to death in 1587 for harbouring priests, one of whom was his brother Humphrey), and Ursula, daughter of Francis Roos, of Laxton, Nottinghamshire. William Macclesfield is said to have died in prison and is one of the prætermissi as William Maxfield; but, as his death occurred in 1608, this is doubtful. Thomas arrived at the English College at Douai on 16 march, 1602-3, but had to return to England 17 May, 1610, owing to ill health. In 1614 he went back to Douai, was ordained priest, and in the next year came to London. Within three months of landing he was arrested, and sent to the Gatehouse, Westminster. After about eight months' imprisonment, he tried to escape by a rope let down from the window in his cell, but was captured on reaching the ground. This was at midnight 14-15 June, 1616. For seventy hours he was placed in the stocks in a filthy dungeon at the Gatehouse, and was then on Monday night (17 June) removed to Newgate, where he was set amongst the worst criminals, two of whom he converted. On Wednesday, 26 June, he was brought to the bar at the Old Bailey, and the next day was condemned solely for being a priest, under 27 Eliz., c, 2. The Spanish ambassador* did his best to obtain a pardon, or at least a reprieve; but, finding his efforts unavailing, had solemn exposition of the Blessed Sacrament in his chapel during the martyr's last night on earth. The procession to Tyburn early on the following morning was joined by many devout Spaniards, who, in spite of insults and mockery, persisted in forming a guard of honour for the martyr. Tyburn-tree itself was found decorated with garlands, and the ground round about strewn with sweet herbs. The sheriff ordered the martyr to be cut down alive, but popular feeling was too strong, and the disembowelling did not take place till he was quite senseless.

Downside Abbey, the Tyburn Convent near Marble Arch, and Holy Trinity Catholic in Staffordshire each honor his relics. See this site for a picture of an altar in Holy Trinity depicting the martyr.

*The Spanish Ambassador at that time was Diego Sarmiento de Acuña, 1st Count of Gondomar, who had succeeded in obtaining the release of Luisa de Carvajal in 1614. 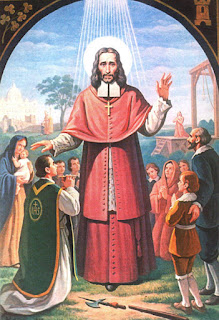 Glorious Martyr, St. Oliver,
who willingly gave your life for your faith,
help us also to be strong in faith.
May we be loyal like you to the see of Peter.
By your intercession and example
may all hatred and bitterness
be banished from the hearts of Irish men and women.
May the peace of Christ reign in our hearts,
as it did in your heart,
even at the moment of your death.
Pray for us and for Ireland. Amen.
July 1, 1681: St. Oliver Plunkett, the Archbishop of Armagh in Ireland, was executed at Tyborn in London on July 1, 1681. He was the last priest to be executed there and the final victim of the "Popish Plot"--that fraudulent, perjured plot cooked up by the BBC's Worst Briton of the 17th Century: Titus Oates.

The Whigs in Parliament, opposed most of all to the succession of Charles II's Catholic brother, James the Duke of York, jumped at the opportunity to attack Catholics--and James--when Titus Oates fabricated the story of a great conspiracy. Charles II did not believe most of the elements of the plot Oates "revealed", especially when the perjuror implicated his own queen, Catherine of Braganza, and his brother.

St. Oliver Plunkett was born in 1629 in Loughcrew, County Meath, Ireland of well-to-do parents and studied for the priesthood at the Irish College in Rome. While Oliver Cromwell was inflicting the "righteous judgement of God" on the Irish who had rebelled against English rule during Charles I's reign, Plunkett had been unable to return to serve his people as a priest after ordination in 1654. He therefore remained in Rome and taught theology. In 1669 he was appointed the Archbishop of Armagh and the Primate of All Ireland and finally returned to Ireland the next year. For a time, Charles II's Restoration leniency allowed Plunkett to accomplish many reforms and reorganizations in education and catechesis. As Archbishop, he confirmed thousands (48,000!) but in 1673, persecution of Catholics in England's colony forced him to go into hiding and close the schools. Arrested in connection with Oates' plot, he was imprisoned at Dublin Castle. He was canonized by Pope Paul VI in 1975 and in 1997 he was named the Patron Saint of Peace and Reconciliation in Ireland. His trial and execution were so manifestly unfair that even Shaftesbury realized things had gone too far--yet, with the Popish Plot's true conspirators, Oates and companions, finally being mistrusted and the whole matter winding down, Charles II did nothing to stop the execution of St. Oliver Plunkett. This site contains a wealth of information, including the prayers and readings for a Mass honoring his Feast.

When Pope Paul VI canonized the martyr, he began his remarks in Gaelic: Dia's muire Dhíbh, a chlann Phádraig! Céad mile fáilte rómhaibh! Tá Naomh nua againn inniu: Comharba Phádraig, Olibhéar Naofa Ploinéad. (God and Mary be with you, family of Saint Patrick! A hundred thousand welcomes! We have a new Saint today: the successor of Saint Patrick, Saint Oliver Plunkett). Today, Venerable Brothers and dear sons and daughters, the Church celebrates the highest expression of love-the supreme measure of Christian and pastoral charity. Today, the Church rejoices with a great joy, because the sacrificial love of Jesus Christ, the Good Shepherd, is reflected and manifested in a new Saint. And this new Saint is Oliver Plunkett, Bishop and Martyr-Oliver Plunkett, successor of Saint Patrick in the See of Armagh-Oliver Plunkett , glory of Ireland and Saint, today and for ever, of the Church of God, Oliver Plunkett is for all-for the entire world-an authentic and outstanding example of the love of Christ. And on our part we bow down today to venerate his sacred relics, just as on former occasions we have personally knelt in prayer and admiration at this shrine in Drogheda.
Posted by Stephanie A. Mann at 12:00 AM