The Bridgettines and England 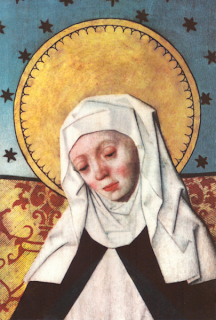 Yesterday was the feast of St. Bridget of Sweden and The Catholic Herald reminds us of her legacy, particularly of the Bridgettine order:

One of six patron saints of Europe and the most celebrated of Sweden’s saints, Bridget was the daughter of a wealthy landowner and related to the royal family. Born in 1303 and married at 13, six of her eight children survived infancy – an unusually lucky family life at a time when most children did not reach their fifth birthday.

However, in 1344, three years after they had gone on pilgrimage together to Santiago de Compostela, her husband Ulf died, after which Bridget, who had always been known for her works of charity, devoted her life to caring for the poor and sick, joining the Third Order of St Francis.

Her most important legacy was the establishment of the Bridgettines, double monasteries under which the nuns were strictly enclosed, emphasising scholarship and study, but the monks were preachers and itinerant missionaries. . . .

In England Richard Reynolds, a monk of the Syon Abbey Bridgittine monastery, became one of the first martyrs of England in 1535.

Bridget’s famous prayer, known as the Fifteen Os, was also tremendously popular in England, and was said to have been inspired after she prayed to know how many blows Jesus Christ suffered during the Passion. He came to her and told her to recite 15 Our Fathers and 15 Hail Marys “with the following Prayers, which I Myself shall teach you, for an entire year”.

The Bridgettine community in England provides this background on Syon Abbey and its martyr, who was called the 'Angel of Syon' even before his execution:

'The Monastery of St. Saviour and St. Bridget of Syon' was a royal foundation, and the only Bridgettine Abbey to be established in England before the Reformation. It was originally built by King Henry V in 1415 on a site in Twickenham opposite his own royal palace at Shene (Richmond), but rebuilt at Isleworth on the banks of the River Thames on the site of an earlier Celestine monastery, first coming into use as a monastery in 1431. Today a newer house on the site, called Syon House, belongs to the Duke of Northumberland. In 2003 excavations were carried out and it was discovered that the abbey church may have been considerably bigger than even Westminster Abbey and would have been an amazing sight from the river. It was a monastery that combined strict observance and practices, modelled on the rule of Saint Augustine and as adapted by Saint Bridget. It was also a centre of learning, the library having contained about 1,400 texts. The foundation consisted of two communities to form a 'double' monastery, in one sixty sisters, in the other thirteen priests, four deacons and eight lay brothers. The monastery flourished until its dissolution by King Henry VIII in 1539. Four years earlier, on 4 May 1535, the 'confessor general' of the Abbey, St. Richard Reynolds, "the Angel of Syon", was brutally executed at Tyburn for not accepting the King's supremacy over the Church in England in place of the Holy Father in Rome. A plaque commemorating him is found today on the wall of one of Syon House's outbuildings. The body of this Bridgettine martyr and canonised saint was placed on the abbey gateway, of which the metre-high carved pinnacle still survives today. This, and the iron cross that once stood on top of the abbey church, are now in the possession of the few remaining enclosed nuns that derive from this first old community who were exiled in the 16thcentury.

Image source: licensed image in wikipedia commons.
Posted by Stephanie A. Mann at 12:30 AM