Aidan Nichols on the Anglican Ordinariate 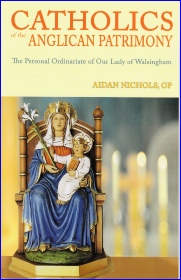 Yesterday, I came home from work to find this book in my mail! I had requested a review copy from Gracewing and it has arrived--a lovely combination of subject, author, and even the cover photo. Father Aidan Nichols, OP is one of my favorite authors (I've read several of his books, including Catholic Thought since the Enlightenment. A Survey; G.K. Chesterton, Theologian; Rome and the Eastern Churches: A Study in Schism; The Panther and the Hind. A Theological History of Anglicanism; The Realm: An Unfashionable Essay on the Conversion of England; and Christendom Awake: On Re-energizing the Church in Culture.

And of course, you know of my abiding interest in the Anglican Ordinariate; so please watch this space for a review. According to the publisher:

When in 1993 Aidan Nichols revived the long-dormant idea of an Anglican Uniate Church, united with the See of Peter but not absorbed, the reaction of many was incredulity. The ideal of modern Ecumenism was, surely, the corporate reunification of entire Communions. This he roundly declared to be unrealistic, for the Protestant and Liberal elements in Anglican history (and Anglicanism's present reality) could never be digested by Roman stomachs. What was feasible was, rather, the reconciliation of a select body Catholic enough to be united, and Anglican enough not to be absorbed. Just over a dozen years later Pope Benedict XVI, responding to the petitions of various Anglican bishops, promulgated the Apostolic Constitution Apostolorum coetibus and the deed was done. The three 'Ordinariates' now established for 'Catholics of the Anglican Patrimony' in Britain, Australia and North America have been described as the first tangible fruit of Catholic Ecumenism. In this short book Nichols reflects on the historical, theological, and liturgical issues involved. He also shows the congruence of the new development with Benedict's wider thinking, and outlines a specific missionary vocation for reconciled Anglicans in England.

You might remember that early in Pope Francis' reign there was concern that he was not that supportive of the Anglican Ordinariate. A recent announcement alleviates that concern completely, as Damian Thompson reported in his blog:

Opponents of the Personal Ordinariate of Our Lady of Walsingham, set up by Benedict XVI to allow ex-Anglicans to worship together with their own liturgy, were so excited when it was reported that Pope Francis, when Archbishop of Buenos Aires, wasn't keen on the initiative. But if that were ever the case, then he has changed his mind.

This week it emerged that Francis has widened the remit of the Ordinariates in Britain, America and Australia. Until now, only ex-Anglicans and their family members could join the new body. But, thanks to a new paragraph inserted into the Ordinariate's constitution by Francis, nominal Catholics who were baptised but not confirmed can join the structure. Indeed, the Holy Father wants the Ordinariates to go out and evangelise such people. Put bluntly, this suggests that English bishops who wanted to squash the body – and whose allies were rushing to get to the new Pope in order to brief against it – have been thwarted.
Here's the fine print, from the Ordinariate's website:

Pope Francis has approved a significant amendment to the Complementary Norms which govern the life of the Personal Ordinariates established under the auspices of Anglicanorum Coetibus.

On 31 May 2013, the Holy Father made a modification to Article 5 of the Norms, in order to make clear the contribution of the Personal Ordinariates in the work of the New Evangelisation.

This paragraph has been inserted into the Complementary Norms as Article 5 §2:

This confirms the place of the Personal Ordinariates within the mission of the wider Catholic Church, not simply as a jurisdiction for those from the Anglican tradition, but as a contributor to the urgent work of the New Evangelisation.

As noted by the Congregation for the Doctrine of the Faith, enrolment into a Personal Ordinariate remains linked to an objective criterion of incomplete initiation (i.e. baptism, eucharist, or confirmation are lacking), meaning that Catholics may not become members of a Personal Ordinariate ‘for purely subjective motives or personal preference’.

So there you have it: a ringing affirmation of the Ordinariate's mission from a supposedly sceptical pontiff. Now what the new body needs is money and perhaps a little more courage to stick its head above the parapet. The Catholic Bishops of England and Wales have so far declined to organise a nationwide second collection at Mass to help their new brethren. They should do so without delay.

It just makes sense that Pope Francis would "embrace" the Anglican Ordinariate, since it is a great means of evangelization, and that's the great theme of his pontificate, putting the "New Evangelization" promoted by Blessed John Paul II and Pope Emeritus Benedict XVI into action!
Posted by Stephanie A. Mann at 1:00 AM