Marriage and Succession in the House of Windsor 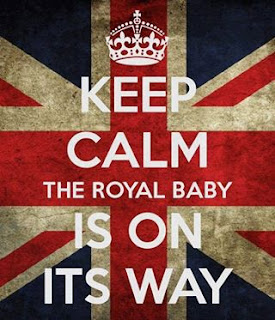 Queen Elizabeth II is ready for her summer holiday at Balmoral and there were news reports last week that she hopes her grandson William's baby comes soon, because she's leaving per the schedule whether the baby had arrived or not (the Duchess of Cambridge is in labor as of Monday, July 22):

It seems Queen Elizabeth II is getting a bit impatient as she waits in a rare British heat wave for the birth of her third great-grandchild. The queen said Wednesday she hopes the former Kate Middleton gives birth soon. Asked by a schoolgirl at a public event whether she was hoping for a boy or a girl, the queen said, "I don't think I mind. I would very much like it to arrive. I'm going on holiday." The queen is shortly expected to begin her annual summer holiday in Scotland. Prince William and his wife are expecting the birth of their first child, who will be third in line to the throne. The baby is due in mid-July. William and Kate say they do not know the baby's gender.

With little fanfare or controversy, Britain announced Wednesday that Queen Elizabeth II -- hardly a social radical -- had signed into law a bill legalizing same-sex marriages in England and Wales. . . . .

Scripture and Tradition, and even The Book of Common Prayer, have always and everywhere defined marriage as between a man and a woman--so she has ignored that authority.

She cannot have thought this through--royal succession has always depended on the marital virtue of the man and woman procreating the heir (at least when they were procreating the heir) so that the legitimacy of the heir was certain and absolute. With so-called same sex marriage, that assurance is gone; since reason assures us that two men or two women cannot conceive a child according to nature. A royal same sex "married" couple producing an heir must resort to some form of surrogacy.

She might as well go on holiday--and stay there. Thank God, again, for the Anglican Ordinariate. Our Lady of Walsingham, pray for us.
Posted by Stephanie A. Mann at 1:30 AM

Email ThisBlogThis!Share to TwitterShare to FacebookShare to Pinterest
Labels: Anglican Ordinariate, Church of England, Defender of the Faith, Elizabeth II, Our Lady of Walsingham