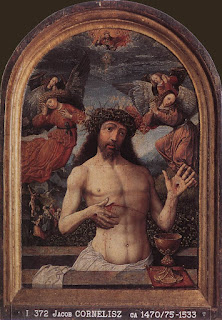 Before the 1969 reforms of the Roman Calendar, today was the Feast of the Most Precious Blood. One of the hymns for the feast was:

Which Henry Nutcombe Oxenham translated. According to the old Catholic Encyclopedia, Oxenham, although attracted to the Catholic Church, and defintely High Church, had troubles after his conversion, although he never reverted or left:

An English controversialist and poet, born at Harrow, 15 Nov., 1829; died at Kensington, 23 March, 1888; was the son of the Rev. William Oxenham, second master of Harrow. He was educated at Harrow School and Balliol College, Oxford, taking his degree in 1850. After receiving Anglican orders, he became curate first at Worminghall, in Buckinghamshire, then at St. Bartholomew's, Cripplegate. While at the latter place, he was received into the Church by Monsignor (afterwards Cardinal) Manning. For a time he contemplated becoming a priest, for which purpose he entered St. Edmund's College, Old Hall, but after receiving minor orders, he left: it is said that his reason was that he believed in the validity of Anglican orders, and considered himself already a priest. He continued to dress as an ecclesiastic and in this anomalous position he spent the remainder of his life. His ambition was to work for the reunion of the Anglican with the Catholic Church, with which end in view, he published a sympathetic article, in answer to Pusey's "Eirenicon", in the shape of a letter to his friend and fellow-convert, Father Lockhart . After the Vatican Council his position became still more anomalous, for his unwillingness to accept the doctrine of Papal Infallibility was known. Though influenced by the action of Dr. Döllinger, with whom he was on intimate terms, he never outwardly severed his connexion with the Catholic Church, and before his death received all the sacraments at the hands of Father Lockhart. His published works include: "The Sentence of Kaires and Poems" (3rd ed., London, 1871); Translation of Döllinger's "First Age of Christianity" (London, 1866, 2 vols: two subsequent editions) and "Lectures on Reunion" (London, 1872); "Catholic Eschatology" (1876; new edition, enlarged, 1878); "Memoir of Lieut. Rudolph de Lisle, R. N." (London, 1886); numerous pamphlets and articles, especially in "The Saturday Review", over the initials X. Y. Z.

He tried his vocation at the London Oratory and travelled to Germany for a long stay. Oxenham never married and was 58 when he died. As an aside, it is interesting that Balliol produced some other famous converts to Catholicism: Gerard Manley Hopkins, Hilaire Belloc, Ronald Knox, Graham Greene, and Christopher Hollis. Don't forget that Lord Peter Wimsey attended Balliol too, according to Dorothy L. Sayers!

Westminster Cathedral in London is dedicated to the Precious Blood of Jesus: DOMINE JESU REX ET REDEMPTOR PER SANGUINEM TUUM SALVA NOS (Lord Jesus, King and Redeemer, save us by your blood) !
Posted by Stephanie A. Mann at 1:00 AM