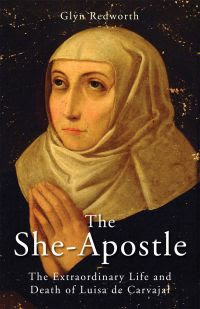 Book Description by OUP: Before dawn one morning in June 1612, an elderly Frenchman took charge of a carriage carrying a precious cargo near Tyburn Fields, London's notorious place of execution. It was heading for a house in Spitalfields, where a wizened Spanish woman was waiting to receive the mortal remains of freshly-martyred Catholic priests. Her name was Luisa de Carvajal and this book tells her story.
Born into a great Spanish noble family, Luisa suffered a horribly abusive childhood and from her early years hankered to become a martyr for her faith. For almost 20 years she struggled to become possibly the first female missionary of modern times. In 1605 - the year of the Gunpowder Plot - she was secreted into England by the Jesuits, despite the fact that she spoke not a word of English. To everyone's surprise including her own, she steadily assumed a prominent role within London's underground Catholic community, setting up an unofficial nunnery, offering Roman priests a secure place to live, consoling prisoners awaiting execution, importing banned books, and helping persecuted Catholics to flee abroad. Throughout this time she ran the grave risk of imprisonment and execution, yet she miraculously managed to avoid this ultimate fate in spite of being arrested on a number of occasions. This vividly written biography, the first to give equal treatment to her double life in Spain and England, is based on Luisa's own autobiographical writings, her sparkling collection of poems and letters, and the detailed reminiscences by dozens of people who worked with her. In parts humorous, the book contains Luisa's biting descriptions of the cost of living in Shakespeare's London, the poor quality of food in the capital, as well as the weekend rowdiness of the English.

Features
~The only full life of Luisa de Carvajal, possibly the first female missionary of modern times
~An intriguing tale of the abused child who dreamt of martrydom for the Catholic cause and smuggled herself into England in the year of the Gunpowder Plot
~Tells the story of her courageous intrigues on behalf of the Catholic cause in Protestant England - from distributing banned books to preserving and distributing the bodily remains of executed priests
~A unique insight into the singular life of a determinedly independent woman in a man's world

The Author: Glyn Redworth taught at Oxford University for several years and was a research fellow at Christ Church before moving to the University of Manchester. Closely associated with the Institute of History in Madrid, he has spent several years in Spain researching Luisa's life. He has published widely on sixteenth and early seventeenth century religious and political history, including In Defence of the Church Catholic: The Life of Stephen Gardiner and The Prince and the Infanta: The Cultural Politics of the Spanish Match. The author discusses some parallels between Luisa de Carvajal and Mother Teresa of Calcutta here.

Contents:
List of Plates (29)
Picture Acknowledgements
Introduction: The Last House in London
1. A Carvajal and a Mendoza
2. Blessed Discipline
3. Toledo Street
4. "Sweet Manacles"
5. New Ways of Living
6. Generation of Vipers
7. The She-Apostle
8. Most Extraordinary Journey
9. Treason and Plot
10. Carrots, Capons, and Plague
11. Grand India
12. Sovereign Virgin
13. Broken English
14. Fashionable and Modest
15. Pears and The Last Supper
16. Oran
17. The Siege of Spitalfields
Afterword
Appendix: Three Poems
Note on Sources
Abbreviations
Notes
Bibliography
Index
My review/comments--Redworth clarified some aspects of the relationship between James I as King of England and the Catholics of England. I knew that his government's pattern of persecution was tied to his diplomatic goals of peace and alliance with Spain. Redworth also demonstrated how James' fear of assassination, fostered by the Gunpowder Plot attempt to blow up Parliament and then by the murder of King Henri IV of France, led to greater efforts to find, arrest, and execute Jesuit priests. James I was also disappointed in ther negative response to the Oath of Allegiance he thought quite reasonable, and was infuriated by Catholic theologians like Bellarmine and Suarez who idenfitied kingly power as coming from the consent of the governed--which was in drastic conflict with James's idea that he reigned by Divine Right.
As to the subject of the biography: Luisa de Carvajal reminded me of Venerable Mary Ward, the English Catholic who attempted to establish an active order for women modeled on the Society of Jesus. On a small scale, de Carvajal succeeded where Ward failed, perhaps because of her position in Spanish society. The back cover of my paperback edition refers to her as a "martyr manque" but Redworth presents evidence that she could be considered a martyr--as her final illness might have been brought about by her imprisonment in 1614, when she was only 48 years old. I suppose an argument against that position is that she had been ill for years (which only makes her efforts and her endurance more remarkable). I admit that I never really warmed to her character, which seems to have been more than a little manipulative, but de Carvajal certainly had a great regard for the Catholic priests and martyrs working in England. She persevered in her goals to their attainment, whether hampered by her brother's demands for settlement of their inheritance, personality conflicts within her community, or official discouragement of her efforts to live and work in London as a Catholic missionary and a contact for imprisoned priests. The one part of the book I could not fathom was the description of the torture meted out to her as a young girl by her uncle and guardian; even more disturbing was her reaction to it (Redworth is definitely disturbed by it too). Excellent resources, including plates, notes, and bibliography.
Posted by Stephanie A. Mann at 2:16 AM