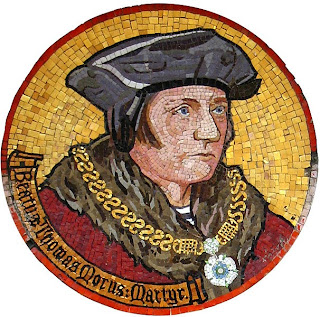 I have written and posted and spoken often about St. Thomas More--he's been mentioned 54 times at least on this blog, for example. For the past two years, especially during the two Fortnight for Freedom events, his name and his cause have been mentioned often. He is praised as a martyr for religious freedom, for conscience, for marriage, for Catholic unity; he is noted as a model of Christian humanism, as a father and educator, writer, lawyer, politician, and friend--and he is sometimes a figure of controversy too, over the issues of heresy and trials for heresy during his term as Chancellor and sometimes for the language he used in the print arguments against William Tyndale. But as G.K. Chesterton said in 1929, "[Saint] Thomas More is important today, but he is not as important now as he will be in one hundred years from today"--isn't hard to believe that in 1929, he was "just" Blessed Thomas More? As I noted last year, Chesterton was correct; he was just off a couple of decades.
Instead of more words about St. Thomas More, here are some words from St. Thomas More--a prayer he wrote and prayed in the Tower of London, awaiting trial and execution:

Give me the grace, Good Lord
~To set the world at naught.
~To set the mind firmly on You and not to hang upon the words of men's mouths.
~To be content to be solitary. Not to long for worldly pleasures. Little by little utterly to cast off the world and rid my mind of all its business.
~Not to long to hear of earthly things, but that the hearing of worldly fancies may be displeasing to me.
~Gladly to be thinking of God, piteously to call for His help. To lean into the comfort of God. Busily to labor to love Him.
~To know my own vileness and wretchedness. To humble myself under the mighty hand of God. To bewail my sins and, for the purging of them, patiently to suffer adversity.
~Gladly to bear my purgatory here. To be joyful in tribulations. To walk the narrow way that leads to life.
~To have the last thing in remembrance. To have ever before my eyes my death that is ever at hand. To make death no stranger to me. To foresee and consider the everlasting fire of Hell. To pray for pardon before the judge comes.
~To have continually in mind the passion that Christ suffered for me. For His benefits unceasingly to give Him thanks.
~To buy the time again that I have lost. To abstain from vain conversations. To shun foolish mirth and gladness. To cut off unnecessary recreations.
~Of worldly substance, friends, liberty, life and all, to set the loss at naught, for the winning of Christ.
~To think my worst enemies my best friends, for the brethren of Joseph could never have done him so much good with their love and favor as they did him with their malice and hatred.
~These minds are more to be desired of every man than all the treasures of all the princes and kings, Christian and heathen, were it gathered and laid together all in one heap.
Amen

Image from wikipedia commons.
Posted by Stephanie A. Mann at 12:30 AM