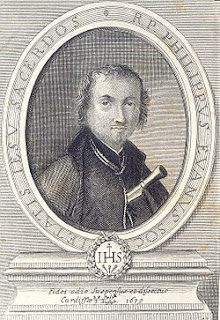 Father Philip Evans, SJ and Father John Lloyd suffered martyrdom on July 22, 1679 in Cardiff, Wales. Although they were tried for supposed involvement in the Popish Plot, they were found guilty of their priesthood and their presence in Wales. This blog provides some detail about their background and contains this great understatement: "1678 was a bad year to be a Roman Catholic priest on the island of Great Britain. (There were many such years in in the 1600s.) But, in 1678, there was a fictional plot by Roman Catholic to assassinate King Charles II. (This was ironic, given the Roman Catholic sympathies of the House of Stuart.) Anyway, a wave of anti-Roman Catholic hysteria swept the land,where authorities political and religious had planted, watered, and nurtured anti-Roman Catholicism for a long time. And hysterical people did not check facts, to confirm or refute them. So the two priest-martyrs became prisoners. They became casualties of hysteria and religious bigotry. Their crime was to be priests, a charge considered on par with committing treason."
As the site summarizes their careers: St. Philip Evans, educated at St. Omer Monastery in France, became a Jesuit in 1665, at age 20. Ten years later, at Liege, he entered the priesthood then embarked for his Welsh mission. For three years Evans ministered there.

Among the priests who suffered during the Popish Plot hysteria, St. John Lloyd's long tenure as a missionary priest is not unusual: St. John Kemble served his flock in Monmouthshire for more than 50--fifty--years! and St. David Lewis, SJ served in Wales for 30 years. Pope Paul VI canonized today's martyrs (and John Kemble and David Lewis) among the Forty Martyrs of England and Wales in 1970. Since today is the feast of St. Mary Magdalen, their feast is usually observed--in parishes named for them, for instance, on July 23.﻿
Posted by Stephanie A. Mann at 12:30 AM