The Christian Century in the WSJ: Decline of the Mainline 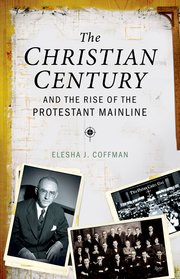 The Christian Century (its original title was the Christian Oracle) was founded in 1884 as a magazine of the Disciples of Christ, one of the seven principal mainline denominations. Charles Clayton Morrison, a young minister with intellectual ambitions, purchased it in 1908, soon made it nondenominational and edited it for 39 years. Morrison had strong opinions, and he knew how to acquire and use what Ms. Coffman, following the French social theorist Pierre Bourdieu, calls "cultural capital"—assets in the marketplace of political and social influence. . . .

It didn't work out that way in reality. Ms. Coffman has read six decades of correspondence to the Century, including hundreds of testimonial letters sent in 1928 to celebrate Morrison's 20th anniversary at the helm, and finds evidence of a polite estrangement between the magazine's largely clerical readers and their less cerebral congregants. The Century provided intellectual stimulus to the liberal clergy precisely because their more conservative laity didn't go in for a lot of high-flown argumentation about social justice. Ms. Coffman clearly shows that any idea of a united liberal Protestant establishment was always more a social construction than a unified body of believers.

According to Oxford University Press:

Elesha Coffman narrates the previously untold story of the magazine, exploring its chronic financial struggles, evolving editorial positions, and often fractious relations among writers, editors, and readers, as well as the central role it played in the rise of mainline Protestantism. Coffman situates this narrative within larger trends in American religion and society. Under the editorship of Charles Clayton Morrison from 1908-1947, the magazine spoke out about many of the most pressing social and political issues of the time, from child labor and women's suffrage to war, racism, and the internment of Japanese Americans during World War II. It published such luminaries as Jane Addams, Reinhold Niebuhr, and Martin Luther King Jr. and jostled with the Nation, the New Republic, and Commonweal, as it sought to enlarge its readership and solidify its position as the voice of liberal Protestantism. But by the 1950s, internal strife between liberals and neo-orthodox and the rising challenge of Billy Graham's evangelicalism would shatter the illusion of Protestant consensus. The coalition of highly educated, theologically and politically liberal Protestants associated with the magazine made a strong case for their own status as shepherds of the American soul but failed to attract a popular following that matched their intellectual and cultural clout.

Elegantly written and persuasively argued, The Christian Century and the Rise of the Protestant Mainline takes readers inside one of the most important religious magazines of the modern era.

Swaim partly agrees with that last statement, but he thinks that Coffman needed to go further in her analysis:

Ms. Coffman's research has uncovered a great deal of material about the rise and decline of mainline Protestantism, and she tells its story well. In my view, however, she treats her subject a little too delicately, with a young scholar's reluctance to draw broad conclusions. So allow me. The decline of liberal Protestantism that began in the 1950s had at least three sources.

Read his analysis of those three sources here. One of them is the wide gap between what the congregants believe about the Holy Bible and Salvation and what the mainline/mainstream Chrisitan intelligentsia posit--think of John Shelby Spong or even the current leader of the Episcopalian Church in the U.S.A., Katharine Jefferts Schori. Sometimes I think of the campaign Blessed John Henry Newman would lead against their teachings, a la his controversy with Renn Dickson Hampden.
Posted by Stephanie A. Mann at 12:30 AM