Lord Rochester, RIP (and the Monkey?) 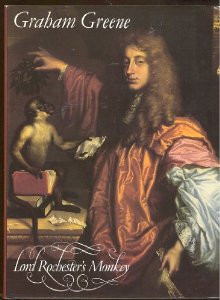 John Wilmot, the 2nd Earl of Rochester, Restoration poet, satirist, courtier, and patron of the arts, died on July 26, 1680. According to the wikipedia article on his life, career, and reputation, at Court he "was renowned for drunkenness, vivacious conversation, and "extravagant frolics" as part of the Merry Gang (as Andrew Marvell described them)." Charles II tolerated his bad behavior and made him a Gentleman of the Bedchamber and forgave his attempted elopement (abduction) of a rich heiress after only three weeks in the Tower of London.

His satires and attacks on the poets he sometimes supported and on Charles II led him into great trouble at Court, however and he did not stay in Charles's good graces long. He died at the young age of 33, and might have had a deathbed conversion, renouncing his wide life of debauchery and sin when Gilbert Burnet (before he became Bishop of Salisbury) visited him as his mother's insistence.

Graham Greene wrote a biography of Lord Rochester, and I remember reading it and being quite thrilled with how wicked Lord Rochester was! Walter Clemons reviewed Greene's book in 1974 for The New York Times and explained the title:

In the best known portrait of John Wilmot, Second Earl of Rochester, a pet monkey proffers a tattered page ripped from one of his master's books. The Earl, resplendent in silks, coolly awards the beast a laurel crown. "Were I...," Rochester wrote, "a spirit free, to choose for my own share/ what sort of flesh and blood I pleas'd to wear,/ I'd be a dog, a monkey or a bear,/ Or any thing but that vain animal/ Who is so proud of being rational."

For more than two centuries Rochester's notoriety as the wildest of "the merry gang" of wits who converged at Charles II's court during the 1660's overshadowed his reputation as a poet. The poetry- skeptical, parodistic, obscene and scathing- was a rediscovery of the 1920's, though John Hayward's 1926 Nonesuch edition escaped prosecution only by being limited to 1,050 copies. A scholarly biography by Vivian de Sola Pinto (1935; revised as "Enthusiast in Wit," 1962) usefully related Rochester's libertinism to Hobbesian materialism- specifically to Hobbes's doctrine that sensory experience was the only philosophical reality. Pinto pitched his claims high: "If Milton is the great poet of belief in the 17th century, Rochester is the great poet of unbelief." . . .

Rochester told the historian Gibert Burnet that "for five years together he was continually drunk; not all the while under the visible effect of it." He was repeatedly banished- and as often recalled- by the King he scurrilously lampooned. Drink made him "extravagantly pleasant"; it also led to disgraces like the smashing of the royal sundial and the brawl at Epsom in which his friend Mr. Downes was killed. Greene plausibly links the most famous of Rochester's masquerades to the aftermath of the Epsom affray: he vanished from London and a mysterious Dr. Alexander Bendo- astrologer, diviner of dreams, dispenser of beauty aids and cures for women's diseases- set up shop on Tower Hill. "Dr. Bendo's" advertisement is one of the most dazzling virtuoso pieces of 17th-century prose. In its impromptu rush of quackery and Biblical cadences, its promises of marvels and its teasing challenge to distinguish the counterfeit from the real. Greene astutely notes "the cracks in the universe of Hobbes, the disturbing doubts in his disbelief, which may have been in Rochester's mind even in the midst of his masquerade, so riddled is the broadsheet with half truths."

Dating his poems is a snare, but Rochester's Songs and his best satires- "A Ramble in St. James's Park," the "Satyr Against Reason and Mankind," "A Letter from Artemisia in the Town to Chloe in the Country," "The Maim'd Debauchee"- all seem to have been written before he turned 29. Thereafter "an embittered and thoughtful man who would die in 1680 of old age at 33," he seldom appeared at court. In his last year he debated theology with the Anglican Gilbert Burnet and underwent a religious conversion, the authenticity of which was impugned when Burnet published his account of it but which Greene, like Vivian de Sola Pinto, believes to have been genuine. "The hand of God touched him," Burnet wrote- "but," Greene characteristically adds, "it did not touch him through the rational arguments of a cleric. If God appeared at the end, it was the sudden secret appearance of a thief... without reason, an act of grace."

The 1976 Penguin edition of Greene's life of Rochester I possess is wonderfully well illustrated with four color portraits, line drawings and frontispieces. Greene demonstrates a great deal of sympathy for this drunken, lustful man, and while Rochester might be "the great poet of unbelief" the topic of religion and faith--Catholic, Puritan, and Anglican--comes up often in the pages.
Posted by Stephanie A. Mann at 12:30 AM