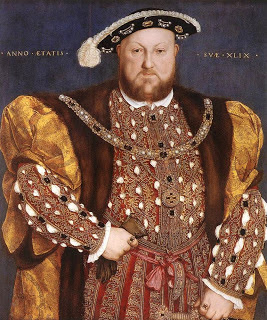 This theory about Henry's mental wiring comes from Oxford researcher Kevin Dutton, who wrote The Wisdom of Psychopaths: Lessons in Life from Saints, Spies and Serial Killers, coming out in paperback later this year. That's correct--this is, among other things, a self-help book. "Psychopaths have a lot of good things going for them," declares the book's website. "They are fearless, confident, charismatic, ruthless and focused--qualities tailor-made for success in twenty-first century society." And for the mid-16th century too? Instead of feeling repulsed by Henry's psychopathic side, should I be proud of him? When he consigned devoted ministers Thomas More and Thomas Cromwell to the Tower, he wasn't cold, he was charismatic. Way to be the boss!

Still, I wanted to know how Professor Dutton diagnosed Henry Tudor. It seems that there is a list of criteria ranging from emotional detachment to feelings of alienation, and 10 people considered "Britain's greatest" were put to the test. Only Henry VIII scored high enough: 174 on a spectrum that required a minimum score of 168 to make it to the Big P. The nine who did not make it: Charles Darwin, Isaac Newton, Elizabeth I, Charles Dickens, Freddie Mercury, Lord Byron, William Shakespeare, Winston Churchill and Oscar Wilde. (I love Queen, but Freddie Mercury?)

If you'd like to know more about the job requirements for being a psychopath, Professor Dutton has a quiz--or rather a "Challenge." Typical of the questions: "Cheating on your partner is OK so long as you don't get caught." Hmmmm. When I think of Henry's marital history, it seems that cheating on his partners was OK even if he was caught. Didn't the Tudor king inform his outraged second wife, "Close your eyes, as your betters have done before you"?

Perhaps Professor Dutton is on to something. But before I agree to lump Henry VIII with Ted Bundy, I thought I'd refresh my memory on what other psychologists and historians have said about Henry's psychological state. His outrageous reign has led to all sorts of speculation.

Read the rest here. Among the theories that Bilyeau discusses is the view that in 1536, Henry VIII suffered terrible injuries in the joust. He was left with that horrible leg wound that would not heal.

I reviewed Suzannah Lipscomb's book, 1536: The Year That Changed Henry VIII a couple of years ago, and I doubted her thesis that he changed so greatly. As Bilyeau notes, he was cruel and capricious toward his courtiers before 1536, too! This was my conclusion:

It's tempting to look at 1536 and the events of those twelve months (the fall at the tournament; the written attack by Reginald Pole; Anne Boleyn's miscarriage, arrest, trial, and execution; the death of Henry Fitzroy, and the Pilgrimage of Grace) as a source for a radical change in behavior. I think rather that there was a development of Henry's characteristic behavior dating from 1534, the beginning of his "reign of terror" against anyone who opposed him. That's when the Act of Supremacy and the Act of Succession, crucial to determining who was for and who was against Henry, were passed. Elizabeth Barton was attainted and executed in 1534. Bishop Fisher and Thomas More were imprisoned in 1534. The Treasons Act was passed in 1534. If any year changed Henry VIII, it was 1534--or rather, Henry VIII changed most radically that year and the behaviors he'd developed continued to determine his reaction to opposition and difficulty.
Posted by Stephanie A. Mann at 1:00 AM