Leanda de Lisle has a new book forthcoming in the UK and in the USA, but notice the different titles. The US title is much more sensationalistic: Tudor: Passion. Manipulation. Murder. The Story of England's Most Notorious Royal Family vs. TUDOR: The Family Story : 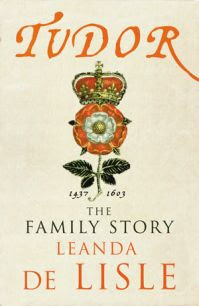 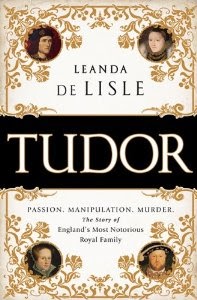 ﻿Note, however, that Amazon.com uses the UK title in the book description:

In an epic narrative sweeping from 1437 to the first decade of the seventeenth century, Tudor: the Family Story traces the rise and rule of the Tudor dynasty. Brutal political instability dominated England during this infamous time, and Leanda de Lisle reveals the personalities, passions, and obsessions of the men and women at its epicenter to rediscover the true significances of previously overlooked figures: from the remarkable women, so wholly devoted to securing the line of succession, to the Princes in the Tower, whose disappearances have remained a mystery for centuries.

This groundbreaking story opens at the unlikely beginning of the Tudor dynasty—with Owen Tudor, a handsome Welsh commoner who, with a pirouette and a trip, landed squarely in the lap of the English Monarchy. The struggle of Owen’s grandson Henry VII and his heirs to secure the line of succession—and the hopes, loves, and losses of the claimants—are the focus of this book. The universal appeal of the Tudors also lies in the family stories: of a mother’s love for her son, of the husband who kills his wives, of siblings who betray one another, of reckless love affairs, of rival cousins, of an old spinster whose heirs hope to hurry her to her end.

Thrilling to read and bristling with religious and political intrigue, Tudor: The Family Story tells the true story behind the myths, throwing a fresh, new light on this perennially fascinating era.

Leanda de Lisle has recently started a facebook page, so I posted a message! and I let you know if I get an answer about why the U.S. title uses such strong words: Passion. Manipulation. Murder. Notorious! while the U.K. title refers to the "family story", so domestic and personal. UPDATE: I did receive a reply from the author and she said that U.S. publisher suggested that title and she trusts that they know their market, so approved the title.

Do you have an opinion about the difference in title? Is it because U.S. audiences are drawn to scandal?
Posted by Stephanie A. Mann at 12:30 AM