King James II and President Barack Obama in the WSJ 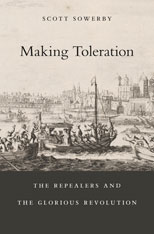 This article in The Wall Street Journal caught my eye for a blogpost because it mentioned King James II. Michael McConnell writes:

This matter—the limits of executive power—has deep historical roots. During the period of royal absolutism, English monarchs asserted a right to dispense with parliamentary statutes they disliked. King James II's use of the prerogative was a key grievance that lead to the Glorious Revolution of 1688. The very first provision of the English Bill of Rights of 1689—the most important precursor to the U.S. Constitution—declared that "the pretended power of suspending of laws, or the execution of laws, by regal authority, without consent of parliament, is illegal."

To make sure that American presidents could not resurrect a similar prerogative, the Framers of the Constitution made the faithful enforcement of the law a constitutional duty.

Now, Michael McConnell does not examine which laws James II refused to enforce, and I don't think that James II was the first to avail himself of that opportunity. The laws James II refused to enforce and which he and the "Repealers" were in fact working to change were the laws against Catholics, Protestant dissenters and others in England. I am still slowly reading Scott Sowerby's Making Toleration, but I see that the Diocese of Shrewsbury in England appreciates Sowerby's work:

An account of a speech given in Chester by Britain’s last Catholic king has been published for the first time in a book examining the struggle for religious liberty in England in the late 17th century.

The book by the respected American historian Professor Scott Sowerby includes a diary extract of an account of possibly the most important speech by King James II on the subject of religious freedom.

For the first time in 350 years, it provides evidence that James viewed religious liberty as a fundamental human right, placing him years ahead of his time.

In his speech in the Cheshire city in August 1687, the King likened a person’s religious convictions to the colour of his or her skin and vowed to grant toleration to all of his subjects.

His speech was part of a tour of England to drum up support for his Declaration for Liberty of Conscience, a manifesto for the legal toleration of non-conformists – Protestant dissenters, Catholics and Quakers – persecuted under the penal laws and Test Acts, under which James himself had to temporarily surrender any claims to hold political office.

He and his friend, William Penn, the Quaker who gave his name to Pennsylvania, argued that the confiscation of goods and money from Catholics and dissenters constituted a violation of their right to hold private property that was guaranteed by the Magna Carta.

They advocated a new law that would guarantee liberty of conscience and were hoping to construct a “tolerationist” Parliament the following year. James also released thousands of non-Anglican dissenters from prison in a general pardon and suspended the penal legislation.

So there's a wide moral difference between what King James II did in refusing to enact penal laws against Catholics AND Protestant dissenters and the Quakers and whatever President Barack Obama has done in delaying a portion of the "Affordable Care Act"--which is a subject far beyond the purpose of this blog and which I will not discuss--and it's unfortunate that McConnell misrepresents or under-represents James II.

Part of Sowerby's argument is that the "Glorious Revolution" was a conservative backlash against James II's really epoch-making effort to advocate for true religious liberty and conscience rights. So the laws that James II refused to enforce were penal laws against Catholics, Protestant dissenters, and Quakers--not really such an injustice after all. The "Glorious Revolution" which was an invasion of England by the Dutch, invited by the "Immortal Seven", was no great advance for human liberty against the attacks of absolutism, but a rejection of a real advance in human liberty: religious freedom and conscience rights!
Posted by Stephanie A. Mann at 1:00 AM