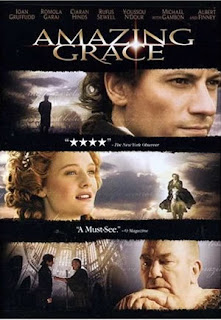 When the movie Amazing Grace was released on DVD several years ago, we gave copies of it to many people as Christmas presents because we were so impressed by the story of William Wilberforce--who died on July 29 in 1833--and the effectiveness of the presentation of his causes and faith in the movie (although the latter was not as focused as it could have been). The movie was based on Eric Metaxas' book AMAZING GRACE: William Wilberforce and the Heroic Campaign to End Slavery. More on his life and influence here, from the BBC.
Of course, the movie does not depict what happened in the Wilberforce family after his death: that three of his sons would become Catholics, mostly under the influence of the Oxford Movement. For that story, The Parting of Friends: The Wilberforces and Henry Man­ning by David Newsome is an excellent source. As David Denton reviewed Newsome's book in The New Oxford Review in 1994, he notes the context of their conversions:
In England in the early 1800s, William Wilberforce was the Great Emancipator. He had been the most visible personality in the abo­lition of the British slave trade (1807), and of slavery itself in the Empire, though that would only occur shortly after his death. The joyful, self-sacrificing Christian influence that the senior Wilberforce and others of that wealthy evangelical group, the "Clapham Sect," brought to bear on English society was consider­able. They have aptly been charac­terized as the Fathers of the Victo­rian Age.

Wilberforce sent three sons, Robert, Samuel, and Henry, to be educated at Oxford's Oriel College. This was a departure for an evan­gelical or Low Churchman, since most sons of these families were sent to Cambridge University, which was considered much more sympathetic to Low Church theol­ogy. At Oxford these bright, high-minded sons of the Great Emanci­pator became part of the golden academic renaissance that had been taking place there since the turn of the 17th century. There they came into contact not only with the High Church influence of John Keble and Edward Posey, but with Hurrell Froude and John Henry Newman, both former evangelicals whose Anglo-Catholi­cism had not only begun to nettle the somnambulant C. of E., but was, for evangelicals, threatening the Reformation itself. Troubling as they were for evangelicals, these Anglo-Catholics were inexorable adversaries of the latitudinarian­ism growing in power at Oxford and in the C. of E., which, then as now, submits the creeds, doc­trines, and Scriptures to the delu­sions of skeptical reason and the acids of materialism.
In fact, it's interesting to note that William Wilberforce died just 15 days after John Keble preached his "National Apostasy" sermon and at the very date of his death, Hugh James Rose was holding a meeting at his church rectory in Hadleigh to form the Association of Friends of the Church, which Hurrell Froude and William Palmer led. The Oxford Movement or Tractarian movement really took off with John Henry Newman's sermons in the University Church of St. Mary the Virgin and the "Tracts for the Times", but the seeming coincidence of dates between the death of the Great Emancipator and the beginning of the Oxford Movement is fascinating.
Posted by Stephanie A. Mann at 12:30 AM