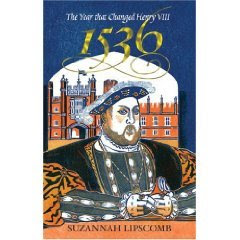 Reading 1536: The Year that Changed Henry VIII was rather frustrating. Suzannah Lipscomb organizes the book with a repetitive structure: each part and each chapter followed a pattern of summary, exposition, summary. "Here is what I am going to tell you; I'm telling you now; This is what I told you." I tired of the repetition and the feeling of deja vu.

In her introduction she discusses her concern about the word "change" and locating the cause of the change in one year. As I read the book I could see why--at the same time she argues that Henry VIII changed and that the events of 1536 made him change, she keeps describing how much he stayed the same and how these changes had been building since early in his reign. He wanted his way before 1536 and he wanted his way after 1536. What changed was the lengths to which Henry would go to get his way--but that potential had been present before 1536 as Thomas More famously warned Thomas Cromwell.

He believed in the divine right of kings before 1536; with Cromwell's help he was able to bolster that belief by taking the title of Supreme Head and Governor of the Church in England and proclaiming England an Empire (himself its Emperor)--and those actions date to 1534. Probably more crucial than anything that happened in 1536 was his reading of Tyndale's argument in The Obedience of a Christian Man that the King and not the Pope should control the church in his own territory. Anne Boleyn gave him that book well before 1536.

He used his power to execute those who threatened his divine supremacy before 1536; he continued to do so after 1536: what changed was the legality of the methods he used as he relied upon Acts of Attainder and a rather adaptable definition of treason, but even those tendencies were present in the execution of his father's former counselors and the Earl of Buckingham and the executions of Elizabeth Barton, the Nun of Kent and her confessors in 1534. The pattern was already there.

He was destined for a career in the Church before his elder brother Arthur died and he regarded himself as a devout Catholic and a good hand with theology before 1536--reading the Bible and determining the Pope had to have been wrong to grant the dispensation so he could marry Catherine of Aragon; he continued this interest in theology as the Supreme Head and Governor of the Church in England with the proclamations he made about religious doctrine, church discipline, and worship. He thought he was a Catholic before 1536 and he continued to after 1536, but he had been dissenting from Catholic teaching for a long time.

It's tempting to look at 1536 and the events of those twelve months (the fall at the tournament; the written attack by Reginald Pole; Anne Boleyn's miscarriage, arrest, trial, and execution; the death of Henry Fitzroy, and the Pilgrimage of Grace) as a source for a radical change in behavior. I think rather that there was a development of Henry's characteristic behavior dating from 1534, the beginning of his "reign of terror" against anyone who opposed him. That's when the Act of Supremacy and the Act of Succession, crucial to determining who was for and who was against Henry, were passed. Elizabeth Barton was attainted and executed in 1534. Bishop Fisher and Thomas More were imprisoned in 1534. The Treasons Act was passed in 1534. If any year changed Henry VIII, it was 1534--or rather, Henry VIII changed most radically that year and the behaviors he'd developed continued to determine his reaction to opposition and difficulty.
Posted by Stephanie A. Mann at 2:04 AM