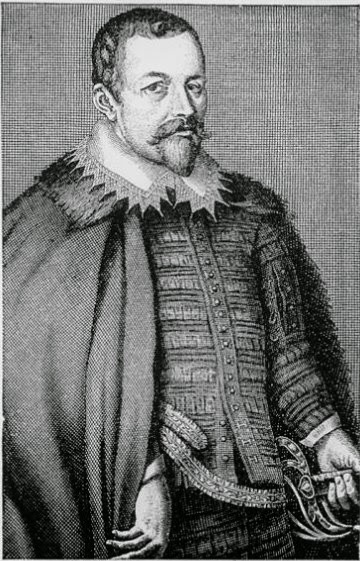 Sir Thomas Bodley died on January 28, 1613. His greatest accomplishment was the restoration of the University of Oxford's library, which had been purged during the reign of Edward VI of all its "papist" volumes, according to the library's website:

Duke Humfrey’s library survived in its original form for just over sixty years; in 1550 it was denuded of its books after a visitation by Richard Cox, Dean of the newly-founded Christ Church. He was acting under legislation passed by King Edward VI designed to purge the English church of all traces of Roman Catholicism, including ‘superstitious books and images’. In the words of the historian Anthony Wood, ‘some of those books so taken out by the Reformers were burnt, some sold away for Robin Hood’s pennyworths, either to Booksellers, or to Glovers to press their gloves, or Taylors to make measures, or to Bookbinders to cover books bound by them, and some also kept by the Reformers for their own use’.

Oxford University was not a wealthy institution and did not have the resources to build up a collection of new printed books to replace those dispersed. In 1556, therefore, the desks were sold, and the room was taken over by the Faculty of Medicine.

The library was rescued by Sir Thomas Bodley (1545–1613), a Fellow of Merton College who had travelled extensively in Europe and had between 1585 and 1596 carried out several diplomatic missions for Queen Elizabeth I. He married a rich widow whose husband had made a fortune from trading in pilchards and, in his retirement from public life, decided, in his own words, to ‘set up my staff at the library door in Oxon; being thoroughly persuaded, that in my solitude, and surcease from the Commonwealth affairs, I could not busy myself to better purpose, than by reducing that place (which then in every part lay ruined and waste) to the public use of students’.

His money was accepted in 1598, and the old library was refurnished to house a new collection of some 2,500 books, some of them given by Bodley himself, some by other donors. A librarian, Thomas James, was appointed, and the library finally opened on 8 November 1602. The first printed catalogue followed in 1605; a new edition of 1620 ran to 675 pages.

In 1610 Bodley entered into an agreement with the Stationers’ Company of London under which a copy of every book published in England and registered at Stationers’ Hall would be deposited in the new library. Although at first the agreement was honoured more in the breach than in the observance, it nevertheless pointed to the future of the library as a comprehensive and ever-expanding collection, different in both size and purpose from the libraries of the colleges. More immediately it imposed an extra strain on space within the building, which was already housing many more books than originally foreseen; new gifts of books made the lack of space ever more acute. So in 1610–12 Bodley planned and financed the first extension to the medieval building, known as Arts End.

The website also includes a link to an illustrated brochure of the library's history and Bodley's crucial role in funding and planning its renewal. One of the library's latest acquisitions is the travelling library of Prince Charles, later King Charles I:

This latest addition to the Bodleian Libraries collection is like a 17th century version of a Kindle. Two red leather cases, designed in the 1970s by Sangorski and Sutcliffe to look like two large books, open up to reveal 59 small volumes covering just about everything that a wealthy educated gentleman would want to read on his travels.

Charles I's travelling library arrived at the Bodleian last week and was acquired through a bequest. The collection of tiny books have gold-tooled bindings and some are believed to have been signed by the Prince himself. Titles include classical texts by the poet Ovid and the philosopher Cicero as well as bibles and religious books such as De Imitatione Christi by Thomas A Kempis.
Posted by Stephanie A. Mann at 12:30 AM