Yet Another Victim of Henry VIII: Anne Boleyn's Lapdog!? 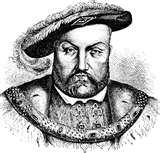 Now, I'm really upset with Henry VIII! It isn't enough that he beheaded two queens, a saintly bishop and a holy layman, dissolved the monasteries, friaries and convents of England, sent many hundreds to their deaths in the aftermath of the Pilgrimage of Grace, martyred the Carthusians of the Charterhouse in London and Observant Friars of Greenwich, mistreated his first wife and daughter, etc, etc,--he defenestrated Anne Boleyn's dog!

According to this blog:

On a December day in 1534, an often-overlooked victim of Henry VIII met a sad end. But this was no overblown nobleman, crowing about his claim to the throne, no broken-hearted wife, turning over the past to see where she had gone wrong, and no devoted councillor unable to fulfil the King’s latest scheme. The death of little Purkey, or Pourquoi, Anne Boleyn’s beloved lapdog was to prove a foreshadowing of her own tragic decline. In the beast’s quaint tilted head and appealing eyes, Anne’s own dark orisons were echoed. In its plaintive bark, Henry heard shades of her winning laugh, and when the creature begged, elegantly dancing on his hind legs, it brought the King to mind of Anne’s graceful steps. So why exactly did the canine have to die?

Purkey was the gift of Honor, Lady Lisle, to the new queen in the winter of 1533. Having remarried to Arthur Plantagenet, illegitimate son of Edward IV, Honor was keen to advance her daughters from her first match. She accompanied Anne to France in the autumn of 1532 and was hopeful that such a gift would encourage the queen to place Katherine and Anne Basset in her household. Anne however, accepted the gift but kept the pretty girls at arm’s length, perhaps recalling her own rise to power from within the service of Catherine of Aragon. Anne adored little Purkey, keeping him often at her side and feeding him titbits from her plate; she was heart-broken when she learned of his death. A year later, in December 1534, he supposedly fell from a window and the King was charged with breaking the terrible news to his wife. In fact, this was because Henry himself was responsible for the animal’s execution. Imagining the scandal if he sent a dog to the block, let alone the practical difficulties, Henry solved the problem with a simple act of defenestration.

Henry VIII determined that Pourquoi or Purkey was a trained spy and thus had the dog destroyed by having it tossed out the window. Obviously, Anne Boleyn was upset:

Anne grieved Purkey’s loss. She had been preparing a special gift for him for New Year, a silver collar hung with dog biscuits fashioned from gold and studded with pearls. In the intensity of her emotion, she ruled that when New Years’ Day arrived, it should be devoted to the memory of her pet, requiring all her ladies in waiting to wear a similar collar and even insisting that Henry too should sport such an item. At first, Henry complied out of guilt, but by the following year, his relationship with Anne had changed so completely that he did not feel obliged to. On January 1 1536, Anne’s ladies wore the silver collars for the second time running, while the Queen spent the day on her knees, as masses were said for the soul of the beast. She was reunited with Purkey a few months later and Henry ordered the silver collars to be melted down and returned to the royal treasury. This was one New Years’ Custom he was not prepared to continue.

There might be some issue with that story, however, since England at that time celebrated the New Year on Lady Day, March 25, the Feast of the Annunciation following the Julian Calendar. More about poor Pourquoi here.
Posted by Stephanie A. Mann at 12:30 AM