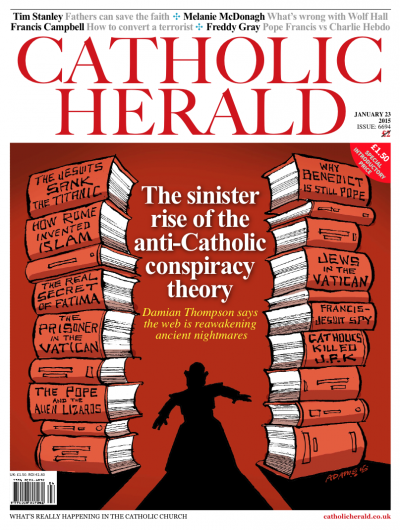 Today is the anniversary of the first executions of Jesuits in England's Popish Plot, a vast Jesuit conspiracy to assassinate Charles II and bring the Catholic Duke of York to the throne--except that there was no vast Jesuit conspiracy and Titus Oates made it all up. You'd think this kind of stuff would be in the ash bins of history by now, but Damian Thompson writes in The Catholic Herald about an organization that still propagates these Jesuit conspiracies, including the sinking of the Titanic:

The building of the Titanic at the Harland and Wolff shipyard in Belfast coincided with a meeting of top bankers at the Jekyll Island Club, Georgia, an exclusive winter retreat for the super-rich. It was here, in November 1910, that representatives of J P Morgan, the Rothschilds and the Rockefellers agreed to set up the US Federal Reserve, America’s central banking system.

This much is a matter of historical record. What isn’t widely known is that these men were acting on behalf of their paymasters, the Jesuits, who “desperately wanted a central bank in America so that they would have a bottomless reservoir from which to draw money for their many wars and other hideous schemes around the world”.

This quotation is taken from a book published by the Pacific Institute of San Diego, California, which bravely exposes Catholic conspiracies, as well as offering “astounding” interpretations of Bible prophecy. (It meets every Saturday morning at the Ramona Community Centre, should you find yourself in the area and want “conclusive proof” of its claims.)

Anyway, the Jesuits knew that the creation of the “Fed” would be opposed by powerful men outside the Rothschild/Morgan/Rockefeller cartel. These opponents “had to be destroyed by a means so preposterous that no one would suspect they were murdered”. So the Society of Jesus, displaying its trademark cunning, ordered the building of an “unsinkable” death ship that would take its plutocrat passengers – who included members of the Guggenheim and Astor families – to a watery grave.

Thompson goes on to discuss how Catholics aren't immune from creating these conspiracy theories and what we ought to do about them. The roots of the these theories about the Jesuits date from the 17th century with the Monita Secreta, a forgery that purported to be instructions for Jesuit control of Europe. Like the Popish Plot, the Monita was the creation of someone kicked out by the Jesuits, taking his revenge.

Read the rest from The Catholic Herald here.
Posted by Stephanie A. Mann at 1:00 AM

Email ThisBlogThis!Share to TwitterShare to FacebookShare to Pinterest
Labels: conspiracies, The Catholic Herald, The Popish Plot, The Society of Jesus, the Titanic