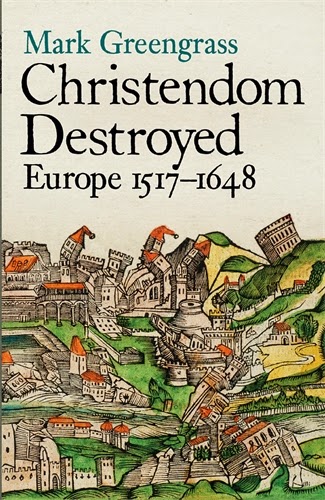 There I was, eating lunch and reading a book review in The Wall Street Journal, when I looked up the page and saw:

But The WSJ editors did not complete this quotation from The Everlasting Man:

This quotation is from Part 2, Chapter Six, "The Five Deaths of the Faith". The context:

IT is not the purpose of this book to trace the subsequent history of Christianity, especially the later history of Christianity; which involves controversies of which I hope to write more fully elsewhere. It is devoted only to the suggestion that Christianity, appearing amid heathen humanity, had all the character of a unique thing and even of a supernatural thing. It was not like any of the other things; and the more we study it the less it looks like any of them. But there is a certain rather peculiar character which marked it henceforward even down to the present moment, with a note on which this book may well conclude.

I have said that Asia and the ancient world had an air of being too old to die. Christendom has had the very opposite fate. Christendom has had a series of revolutions and in each one of them Christianity has died. Christianity has died many times and risen again; for it had a god who knew the way out of the grave. But the first extraordinary fact which marks this history is this: that Europe has been turned upside down over and over again; and that at the end of each of these revolutions the same religion has again been found on top. The Faith is always converting the age, not as an old religion but as a new religion. This truth is hidden from many by a convention that is too little noticed. Curiously enough, it is a convention of the sort which those who ignore it claim especially to detect and denounce. They are always telling us that priests and ceremonies are not religion and that religious organisation can be a hollow sham; but they hardly realise how true it is. It is so true that three or four times at least in the history of Christendom the whole soul seemed to have gone out of Christianity; and almost every man in his heart expected its end. This fact is only masked in medieval and other times by that very official religion which such critics pride themselves on seeing through. Christianity remained the official religion of a Renaissance prince or the official religion of an eighteenthcentury bishop, just as an ancient mythology remained the official religion of Julius Caesar or the Arian creed long remained the official religion of Julian the Apostate. But there was a difference between the cases of Julius and of Julian; because the Church had begun its strange career. There was no reason why men like Julius should not worship gods like Jupiter forever in public and laugh at them forever in private. But when Julian treated Christianity as dead, he found it had come to life again. He also found, incidentally, that there was not the faintest sign of Jupiter ever coming to life again. This case of Julian and the episode of Arianism is but the first of a series of examples that can only be roughly indicated here. Arianism, as has been said, had every human appearance of being the natural way in which that particular superstition of Constantine might be expected to peter out. All the ordinary stages had been passed through; the creed had become a respectable thing, had become a ritual thing, had then been modified into a rational thing; and the rationalists were ready to dissipate the last remains of it, just as they do to-day. When Christianity rose again suddenly and threw them, it was almost as unexpected as Christ rising from the dead. But there are many other examples of the same thing, even about the same time. The rush of missionaries from Ireland, for instance, has all the air of an unexpected onslaught of young men on an old world, and even on a Church that showed signs of growing old. Some of them were martyred on the coast of Cornwall; and the chief authority on Cornish antiquities told me that he did not believe for a moment that they were martyred by heathens but (as he expressed it with some humour) `by rather slack Christians.'

Mark Greengrass' new study of the Reformation era is the latest volume in the Penguin History of Europe series:

Christendom Destroyed describes Europe at a time of overwhelming crisis. At the beginning of the period most of Europe is united under the spiritual leadership of the Pope, by the end of it Europe is burned out, devastated and permanently split by religious dissent - the structure that had provided the framework under which the continent had organized itself for centuries was finished.This extraordinary book is as much about the fate of ordinary people as about the rulers who had to navigate through an exceptionally treacherous time, with all Europeans having to deal with violent, sometimes overwhelming novelty, whether social, spiritual, geographical or political.
Posted by Stephanie A. Mann at 12:30 AM