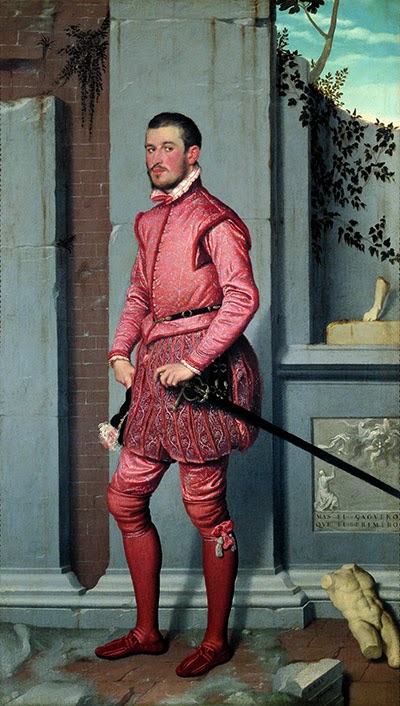 During our 2006 visit to Paris, I went to the Titien (or Titian) exhibition at the Musee du Luxembourg, the gallery of the French Senat. It was a great event in Paris and I appreciated the quality of the selection. I've enjoyed attending exhibitions at the Grand Palais and the Luxembourg gallery--the organizational plans of the paintings, sculptures and artifacts have been brilliant and I've found myself mostly among Parisians. They are completely attentive viewers of each object, reading the descriptions and observing the details minutely. Perhaps the Marie Antoinette exhibition at the Grand Palais in 2008 was the best of all in its concept and presentation, although I also thrilled at both the thesis and the content of the France 1500 (between the Middle Ages and the Enlightenment) exhibition there in 2010. My husband went with me last year to the Josephine exhibition at the Musee du Luxembourg.

One painting that caught my eye was the Portrait de Gian Girolamo Grumelli dit “le Chevalier en rose”, 1561 by Giovan Battista Moroni. It is now included in an exhibition of Moroni's portraits at the Royal Academy in London. Piers Baker-Bates reviews the exhibition for History Today:

Moroni excelled above all as a portrait painter and the psychologically acute works on display at the Royal Academy should cement his reputation, although, arguably, the few religious works shown here are qualitatively on a par with the portraits. The exhibition takes us chronologically through Moroni’s career and illustrates clearly how his artistic trajectory developed. Particular attention has been paid to the background and hang, which superbly set off the paintings displayed.

For example, take the portrait of Giovanni Gerolamo Grumelli, the so-called Man in Pink (pictured above). Grumelli’s salmon pink, elaborately trimmed, costume dominates the room in which his portrait hangs. At the same time the cryptic motto of the sitter in the bottom right corner of the painting is not written in his native Italian, but in Spanish: Mas el çaguero que el primero (‘Better the latter than the former’). It is the dramatic realism of such portraits that struck the Victorians and that still impresses us today, as does Moroni’s ability to depict fabrics and textures.

What I noticed in 2006 was the pink in his cheeks and over his ear and his gaze at the viewer. The broken torso, fallen from the statue in the ruined niche and vine growing INSIDE--for all his personal grandeur, Gian Girolamo Grumelli has to face some facts--things are crumbling around him.
Posted by Stephanie A. Mann at 1:00 AM