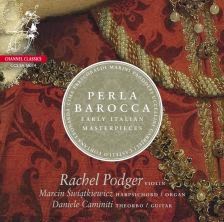 Perla Barocca presents works by Fontana, Frescobaldi, Uccellini, Castello, Marini, Pandolfi Mealli,Leonarda, Gabrieli, Cima, and Bertali. We listened to this CD often during our Christmas/New Year break. The music is often festive and vibrant, with Rachel Podger's violin, Marcin Swiatkiewicz's harpsichord and organ, and Daniele Cammiti's Theorbo collaborating--the chaconne (chiaconne) by Bertali at the end of the CD is particularly rhythmic and exciting.

The Gramaphone reviewer liked the CD too:

It would be hard to imagine a more enticing introduction to the delights of 17th-century Italian violin music. The composers represented in this programme were all fascinated by the violin’s technical possibilities but, more than that, were absorbed by the task of creating viable forms for instrumental music. Starting from vocal models, the Cima is like a madrigal in the way each sentence presents a new variant, whereas the later sonatas by Fontana, Castello, Marini and Uccellini take their cue from the highly expressive vocal monody. By the time we reach Isabella Leonarda’s captivating sonata, the succession of ideas has coalesced into a sequence of short, distinct movements.

The term "baroque pearl" refers to a pearl that is not uniformly round. During the Renaissance era, they were highly prized for their natural beauty and uniqueness, according to the Encyclopedia Britannica.
Posted by Stephanie A. Mann at 12:30 AM