Filling the Shakespearean Gaps: Many Kinds of Silence 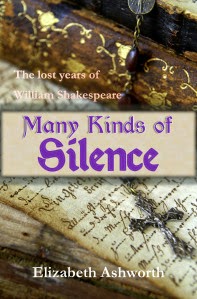 Ernst Anselm Joachim (EAJ) Honigmann died in 2011; one of his most influential works was Shakespeare: The Lost Years. According to The Telegraph's obituary:

His thesis in The Lost Years followed EK Chambers’s suggestion that the young Shakespeare might have been “William Shakeshaft”, a player known to have been active in Lancashire in the 1580s. Honigmann published this as an “interim report” on the possibility that Shakespeare/Shakeshaft worked as a schoolmaster for a noble Roman Catholic family in Lancashire (and may himself have been a Catholic at this date).

Historical fiction author Elizabeth Ashworth writes in her 2014 novel about that lost period, imagining that Shakespeare was involved not only as a player and a schoolmaster, but as a companion to Father Edmund Campion:

When William Shakespeare leaves his home in Stratford in the company of a Catholic priest he knows that he is walking into danger, but the vast libraries held in the name of God are enough to tempt him to risk his life in the pursuit of knowledge. However, the capture and death of his mentor, Edmund Campion, and his return to Stratford set William on an altogether different path. Marriage to Anne Hathaway means he must turn his back on the priesthood, but there are other ways for a clever and charming young man to be of use to the faith.

Many Kinds of Silence traces the story of a young William Shakespeare and his patron, Ferdinando Stanley, and reveals how religion, science and choosing in whom to place your trust meant the difference between life and death in Elizabethan England.

I've started reading the novel on my Kindle--it's available now at a very attractive price! One of the historical characters in the novel is the Fifth Earl of Derby, Ferdinando Stanley, whose claim to the throne came through the Brandon side of the Tudor succession, His great-grandmother was Henry VIII's younger sister Mary, the Dowager Queen of France, who married Charles Brandon, Henry's great friend. Thanks to Leanda de Lisle's triple biography of the Grey sisters, I've known about Mary's heirs through her daughter Frances, but this other line of succession is new to me. Ferdinando's grandmother was Mary Brandon's youngest daughter, Eleanor who married Henry Clifford, 2nd Earl of Cumberland. Eleanor's daughter Margaret, also an heir to the throne, married Henry Stanley, 4th Earl of Derby, and Elizabeth Ashworth describes some of the family vicissitudes and Ferdinando's fate on her website:

Mary Tudor was first married to King Louis of France, but on his death she secretly married the man she was in love with – Charles Brandon. Mary and Charles had three surviving children – Henry, Frances and Eleanor. Henry died young, which left the two daughters to carry the line of succession. Frances was the mother of Lady Jane Grey, the nine days’ queen. Eleanor married Henry Clifford, 2nd Earl of Cumberland and their only surviving child, a daughter, Margaret, married Henry Stanley, 4th Earl of Derby. Margaret was seen by some as the rightful heir to Elizabeth I, however, in 1597 she was placed under house arrest after being accused of using sorcery to predict when the queen would die. (Those of you familiar with the story of the Duke of Clarence in the reign of Edward IV may see some parallels here.) It was also known that she kept the Catholic faith and if there was one thing that Elizabeth and her advisors wanted to avoid, it was a succession that would result in the country’s return to Catholicism.

However, her eldest surviving son, Ferdinando Stanley, had been brought up at court and seems to have been groomed as the natural successor to the queen even though he was never officially named as heir. The only problem was that many of the queen’s advisors were concerned that he might also be a secret Catholic – and it seems that Catholics abroad harboured the same suspicions because they sent Richard Hesketh to offer support and an army to Ferdinando should he wish to take the throne by force. After listening carefully to the offer and riding with Hesketh to London, it seems that Ferdinando eventually rejected the opportunity and handed Hesketh over to Elizabeth’s ministers. He must have thought that this act would confirm his loyalty to the queen, but matters did not work out as he had hoped. Questions were raised about how long it had taken him to reject the offer, suspicion fell on him and he found himself out of favour and denied several roles, such as the Lord Chamberlain of Chester, that he thought were his by right. He is quoted as saying that he was ‘crossed in court and crossed in his country’. It was not long after this that he died in mysterious circumstances.

Ferdinando was succeeded as Earl of Derby by his brother William--who is one of the candidates for non-Stratford Shakepearean authorship.
Posted by Stephanie A. Mann at 12:30 AM