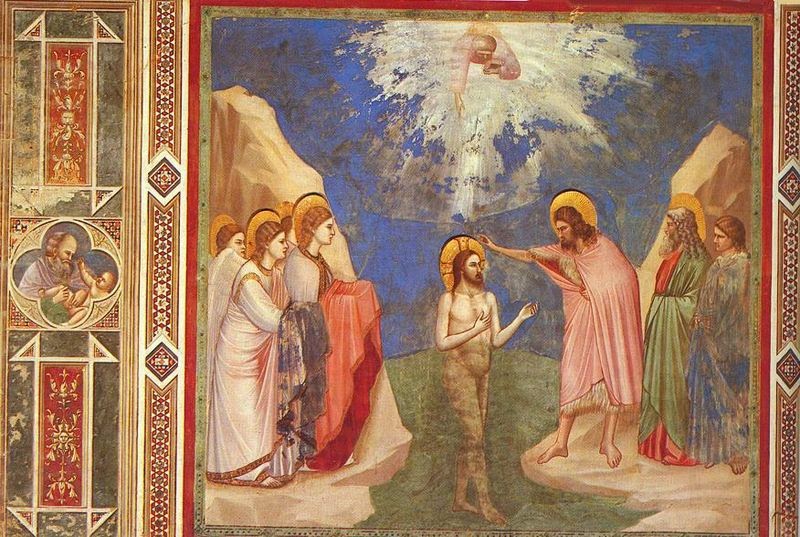 This is really an Advent text, but since today is the Baptism of the Lord by St. John the Baptist in the Jordan River (in the Ordinary Form) it kind of fits--here is Orlando Gibbons' setting of "This is the record of John":

This is the record of John, when the Jews sent priests and Levites from Jerusalem to ask him, Who art thou? And he confessed, and denied not, and said plainly, I am not the Christ.

And they asked him, What art thou then? Art thou Elias? And he said, I am not. Art thou that Prophet? And he answered, No.

Then said they unto him, What art thou? that we may give an answer unto them that sent us. What say’st thou of thyself? And he said, I am the voice of him that crieth in the wilderness, Make straight the way of the Lord. (John 1: 19-23)

According to the webpage for St. John's College Chapel:

William Laud endowed the college richly during and after his presidency, and the fine pre-Reformation ecclesiastical vestments that he gave are displayed every term. Laud’s friendship with Orlando Gibbons led to the composition of ‘This is the record of John’ for the choir of St John’s, and this superb setting of a text from the first chapter of John’s gospel is sung regularly in chapel: after centuries of neglect, it is now recognised as one of the supreme English anthems.

The St. John's Chapel Choir has also recorded the anthem. Laud was President of St. John's from 1621 to 1633, after being a Fellow and receiving both his B.A. and M.A. degrees from St. John's.
Posted by Stephanie A. Mann at 1:00 AM