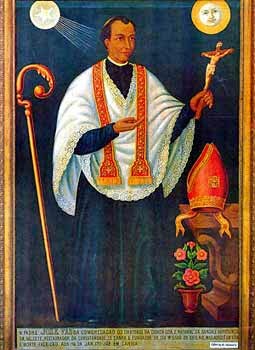 Reading St. Joseph Vaz's story after Pope Francis canonized him during his visit to Sri Lanka, I could not help but note the similarity of his covert mission to that of the English missionary priests of the sixteenth century. The Oxford Oratory has this biography of him, noting that he, like Blessed John Henry Newman, was the founder of the Oratory movement in his native country, India, and St. Joseph Vaz was inspired by St. Philip Neri:

St Philip’s missionary zeal was not lost on Joseph, who became increasingly concerned with the plight of the Church on the island of Ceylon. No priest had been able to minister there for fifty years, because of restrictions imposed by the Dutch rulers of the island, who proscribed Catholicism, and spared no efforts in trying to draw Catholics away from their faith. Joseph felt that something must be done, and so he set off on foot with only two companions, first, for the south of India and then, if God willed, Ceylon. It seemed madness: the distance, the lack of means, his ignorance of the languages, the danger of trying to evade the Dutch blockade. But no-one could dissuade him, and in 1686 he landed at Jaffna, on the coast of Ceylon.

But difficulties he had encountered on the journey took their toll: he fell gravely ill, and was abandoned by one of his two companions. In time he recovered, and began trying to establish contact with those Catholics who lived hidden in the area of Jaffna. Eventually he was able to discover a few, and these first discoveries soon led to more. So in spite of the ever-present danger of arrest and death, there began a regular apostolate of reconciling those who had fallen away from their faith, encouraging and ministering to the faithful, and gaining converts. Going about his duties dressed as a beggar, keeping his needs to the barest minimum, for nine years Joseph travelled around the island, engaged in his missionary work. Often the Dutch were hot on his trail but he repeatedly evaded them, enhancing his reputation as one under the special protection of divine providence.

His underground ministry, in disguise and on the run has many other parallels, including 20th century Mexico, etc. As Pope Francis said in his homily at the canonization Mass:

Blessed Vaz, said the Holy Father in his homily, “like countless other missionaries in the history of the Church … responded to the Risen Lord’s command to make disciples of every nation. By his words, but more importantly, by the example of his life, he led the people of this country to the faith which gives us 'an inheritance among all God’s holy ones'. In St Joseph we see a powerful sign of God’s goodness and love for the people of Sri Lanka. But we also see in him a challenge to persevere in the paths of the Gospel, to grow in holiness ourselves, and to testify to the Gospel message of reconciliation to which he dedicated his life”.

“St Joseph Vaz continues to be an example and a teacher for many reasons, but I would like to focus on three”, he continued. “First, he was an exemplary priest. Here today with us are many priests and religious, both men and women, who, like Joseph Vaz, are consecrated to the service of God and neighbour. I encourage each of you to look to St Joseph as a sure guide. He teaches us how to go out to the peripheries, to make Jesus Christ everywhere known and loved. He is also an example of patient suffering in the cause of the Gospel, of obedience to our superiors, of loving care for the Church of God.

Like ourselves, St Joseph Vaz lived in a period of rapid and profound transformation; Catholics were a minority, and often divided within; there was occasional hostility, even persecution, from without. And yet, because he was constantly united with the crucified Lord in prayer, he could become for all people a living icon of God’s mercy and reconciling love”.