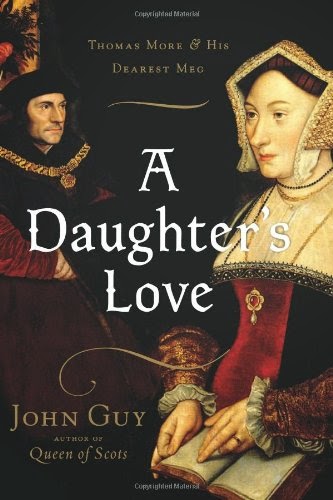 In the TV miniseries adaptation of Hilary Mantel's Wolf Hall, Thomas More and Thomas Cromwell face off again, just as they do across the fireplace at the Frick. Now that the words of a book are images on the screen, Mantel's mischaracterization of Thomas More gets another viewing. I have not read Wolf Hall and really don't intend to see the miniseries when it comes to the USA later this year, but commentators are reflecting on how historically accurate Mantel's view of More is. See this article, for example, in The Guardian.

This issue came up in 2012 when a review of Mantel's Bring Up the Bodies mentioned Mantel's presentation of More: "In Mantel’s version, More is no saint, as he almost certainly was not in real life: he’s fussily pious, stiff-­necked and unnaturally fond of torturing heretics." (Note that Thomas More does not appear as a character in Bring Up the Bodies because he was executed in the pages of Wolf Hall.) The Guardian article sums up Mantel's More thusly: "Mantel’s portrait, however, is of a torturer of heretics with a penchant for self-punishment and a misogynist to boot."

If these two summaries of Mantel's More are accurate, her portrait is entirely untrustworthy. I won't repeat the discussion of Thomas More and torture, which has been done over and over again, but it is ridiculous to say that Thomas More was a) fussily pious and stiff-necked, b) with a penchant for self-punishment, and c) a misogynist to boot.

a) One man who hated fussy piety and stiff-necked religiosity was Desiderius Erasmas, and he loved Thomas More:

For I do not think, unless the vehemence of my love leads me astray, that Nature ever formed a mind more present, ready, sharpsighted and subtle, or in a word more absolutely furnished with every kind of faculty than his. Add to this a power of expression equal to his intellect, a singular cheerfulness of character and an abundance of wit, but only of the candid sort; and you miss nothing that should be found in a perfect advocate.

and from his written portrait of Thomas More

He seems born and framed for friendship, and is a most faithful and enduring friend. He is easy of access to all; but if he chances to get familiar with one whose vices admit no correction, he manages to loosen and let go the intimacy rather than to break it off suddenly. When he finds any sincere and according to his heart, he so delights in their society and conversation as to place in it the principal charm of life. He abhors games of tennis, dice, cards, and the like, by which most gentlemen kill time. Though he is rather too negligent of his own interests, no one is more diligent in those of his friends. In a word, if you want a perfect model of friendship, you will find it in no one better than in More. In society he is so polite, so sweet-mannered, that no one is of so melancholy a disposition as not to be cheered by him, and there is no misfortune that he does not alleviate. Since his boyhood he has so delighted in merriment, that it seems to be part of his nature; yet he does not carry it to buffoonery, nor did he ever like biting pleasantries. When a youth he both wrote and acted some small comedies. If a retort is made against himself, even without ground, he likes it from the pleasure he finds in witty repartees. Hence he amused himself with composing epigrams when a young man, and enjoyed Lucian above all writers. Indeed, it was he who pushed me to write the "Praise of Folly," that is to say, he made a camel frisk.

In human affairs there is nothing from which he does not extract enjoyment, even from things that are most serious. If he converses with the learned and judicious, he delights in their talent; if with the ignorant and foolish, he enjoys their stupidity. He is not even offended by professional jesters. With a wonderful dexterity he accommodates himself to every disposition. As a rule, in talking with women, even with his own wife, he is full of jokes and banter.

No one is less led by the opinions of the crowd, yet no one departs less from common sense. One of his great delights is to consider the forms, the habits, and the instincts of different kinds of animals. There is hardly a species of bird that he does not keep in his house, and rare animals such as monkeys, foxes, ferrets, weasels and the like. If he meets with anything foreign, or in any way remarkable, he eagerly buys it, so that his house is full of such things, and at every turn they attract the eye of visitors, and his own pleasure is renewed whenever he sees others pleased.

Thomas More was not fussily pious and stiff-­necked--Erasmus would not have been his friend if he had been and More would have certainly been the target, not in on the joke, of The Praise of Folly.

b) Yes, Thomas More wore a hair shirt, fasted, used the discipline, and otherwise practiced self-denial. These are all common to saints who do rather extraordinary penance--but More kept those matters secret and did not flaunt or advertise them. Thomas Cromwell should not have known about it--there is that famous story about Thomas More's hair shirt peaking up under his outer garments and him stuffing it back out of sight, but otherwise, it was unknown. He gave his hair shirt to this daughter Meg just before his execution, meaning that he wore it in the Tower of London while he was preparing for death, natural or judicial, but did not want it revealed when he was taken for execution. Mantel's Cromwell perverts More's private penitential practices--and for a 21st century public that made the "50 shades" books best sellers, it's just too twisted that it now judges Thomas More as some sort of sado-masochist (torturing both heretics and himself).

c) Thomas More was not a misogynist if that word has its usual meaning. Does a misogynist educate his daughters as well as his son and rejoice in one daughter's academic accomplishments? The relationship between Thomas More and his daughter Meg, depicted in John Guy's A Daughter's Love, puts the lie to Mantel's misogynistic More. More married the eldest Colt sister in spite of being in love with one of the younger--he thought of her feelings above his own. A misogynist does not do that. There is also the story of his father-in-law reminding his daughter Jane, that More could by rights punish her in ways other than teaching her to read and write, again demonstrating that More was unusual for his time in how he treated women.

Why does Mantel pile on Thomas More so much? Is it because he is Catholic hero and saint? Aren't all of us, past and present, an inconsistent mixture of goodness and sinfulness? No one is perfect, not even Thomas Cromwell, yet Mantel's Cromwell seems to have all the postmodern virtues and Thomas More all the medieval vices (in the modern view). For Mantel to create such a caricature of Thomas More, especially in historical fiction where it has so much reach and influence, is both bad history and bad art.

I'm working on some interviews, presentations, and articles during the US broadcasts of the series on PBS in April/May; it's a good opportunity to explain what the Church means when she canonizes a saint and talk about the history of the English Reformation!
Posted by Stephanie A. Mann at 12:30 AM