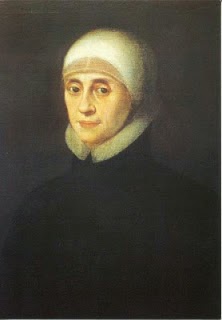 O heavenly Father, Almighty God, I offer up to Thee this day all the holy Masses said throughout the whole Catholic world, to obtain the grace that the Servant of God, Mary Ward, may be publicly acknowledged worthy of Beatification. O Jesus, deign soon to glorify Thy humble servant. Amen.

Venerable Mary Ward, foundress and recusant Catholic, died on January 30, 1645, near York during the English Civil War. Her congregation posts this information about the cycle of paintings that depict her life and journeys:

There are fifty paintings, each 142 x 105 cm, known as the ‘Painted Life of Mary Ward’ that show her spiritual journey. They are displayed in the ‘Mary Ward Hall’ in Augsburg in Germany. Very little information has come down to us as to the origins of the paintings. It is most probable that they were painted by various artists somewhere between Flanders and the Tyrol in the second half of the seventeenth century. There is written evidence that places them in Munich between 1680 and 1717, but how they came to Augsburg is unknown.

The initiative to commission the paintings must have come from Mary Ward’s first companions as the paintings tell the story of her life in considerable detail. Writing her life would have been risky as Mary Ward’s Institute had been condemned by the Church. Commissioning a series of paintings that told the story diminished the risk of ecclesiastical censure – though not entirely. At various times the local bishop ordered their removal from the walls of the Augsburg Convent. During the Second World War the paintings were removed and hidden, and therefore survived the destruction of the Augsburg convent.

The earlier paintings are better artistically than the later ones, and tell the story of Mary Ward’s early life, her vocation and the founding of her institute. Many of the later ones are artistically not remarkable but they contain a series of deep spiritual experiences that are not known from the written sources.

The inscriptions on the paintings are written in German and were most likely added at the end of the seventeenth century after the completion of the pictures.

Then Cardinal Ratzinger referred to one of these paintings in his homily for a Mass celebrating the 400th anniversary of Mary Ward's birth on January 23:

On the page of the booklet for this Mass we see a very lovely picture of the first stage of Mary Ward’s life. The little child has left her bed and taken the first steps towards the open space of life. From her mouth has come her first word, the name of Jesus. One gets the impression that little Mary is following the sound of that word, walking along the trail of that name. Her first steps coincided with her first word. The name Jesus became the path of her life. In fact the many journeys in the life of Mary Ward were made always in the ambit of that name, all her life was a response to the call expressed in the name of Jesus.
Posted by Stephanie A. Mann at 1:00 AM