At the Name of Jesus 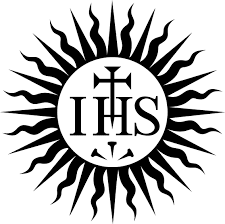 The Introit for Mass yesterday and today is taken from St. Paul's Epistle to the Philippians:" at the name of Jesus every knee should bow, in heaven and on earth and under the earth, and every tongue confess that Jesus Christ is Lord, to the glory of God the Father."

This Feast had been suppressed after the Second Vatican Council but was restored in 2002. It is common in Catholic piety to devote the month of January to the Holy Name. The Fish Eaters website notes that we should be ready to pray in reparation when this Name, the only name by which we may be saved (Acts 4:8-12) is taken in vain, used as swear word, or otherwise disrespected:

the Catholic in the room will (or at least should) make reparation by crossing himself and praying "Sit nomen Dómini benedíctum!" ("Blessed be the Name of the Lord!"), to which another Catholic who might be in the room replies, "Ex hoc nunc, et usque in sæculum!" ("from this time forth for evermore!") or "per ómnia saecula saeculórum" ("unto ages of ages").

St. Bernard of Clairvaux wrote a prayer to the Holy Name commonly used as a hymn for the Feast:

Jesus, the very thought of Thee With sweetness fills the breast! Yet sweeter far Thy face to see And in Thy presence rest.

No voice can sing, no heart can frame, Nor can the memory find, A sweeter sound than Jesus' name, The Savior of mankind.

O hope of every contrite heart! 0 joy of all the meek! To those who fall, how kind Thou art! How good to those who seek!

But what to those who find? Ah! this Nor tongue nor pen can show The love of Jesus, what it is, None but His loved ones know.

Jesus! our only hope be Thou, As Thou our prize shalt be; In Thee be all our glory now, And through eternity. Amen.

In the fifteenth century, St. Bernardine of Siena promoted devotion to the Holy Name, using the initials IHS as an image for veneration. Devotion to the Holy Name of Jesus spread to England in the fifteenth century and was at its height in popular devotion before the English Reformation, with a fraternity and parish guilds, chapels dedicated to the Name, the practice of special votive Masses, specific prayers, and use of the IHS initials. Since it was a devotion based so firmly on the Holy Bible, some aspects of devotion survived the English Reformation, and the feast of the Holy Name was included in The Book of Common Prayer.

The imagery of the IHS initials, however, was too Catholic for many in the Church of England and was associated with High Church Anglo-Catholicism as practiced by Bishop Lancelot Andrewes and Archbishop of Canterbury William Laud, so the cult of devotion to the Holy Name was suppressed, according to this article. The IHS symbol became a mark of recusant Catholicism, especially since the Society of Jesus used the initials as an emblem. Since Englishmen who studied for the priesthood on the Continent and returned as Jesuit missionaries to the Catholics of England were singled out from Elizabeth's reign to the Popish Plot as traitorous spies and instigators of rebellion, it could not be an acceptable sign in England.
Posted by Stephanie A. Mann at 1:00 AM

Email ThisBlogThis!Share to TwitterShare to FacebookShare to Pinterest
Labels: Liturgical Year, St. Bernard of Clairvaux, the Christmas Season, the English Reformation, The Holy Name of Jesus, The Society of Jesus