Dominic Selwood on the English Reformation

Writing on his Telegraph blog about how history can be manipulated by the ruling party, Dominic Selwood writes:

So what about England? Has our constitutional monarchy and ancient tradition of parliamentary democracy protected our history from political manipulation? Can we rely on what we are taught and told, or are there myths we, too, have swallowed hook, line, and sinker?

Where better to start than with that most quintessentially English of events ­— the break with Rome that signalled the birth of modern England?

For centuries, the English have been taught that the late medieval Church was superstitious, corrupt, exploitative, and alien. Above all, we were told that King Henry VIII and the people of England despised its popish flummery and primitive rites. England was fed up to the back teeth with the ignorant mumbo-jumbo magicians of the foreign Church, and up and down the country Tudor people preferred plain-speaking, rational men like Wycliffe, Luther, and Calvin. Henry VIII achieved what all sane English and Welsh people had long desired ­– an excuse to break away from an anachronistic subjugation to the ridiculous medieval strictures of the Church.

For many in England, the subject of whether or not this was true was not even up for debate. Even now, the historical English disdain for all things Catholic is often regarded as irrefutable and objective fact. Otherwise why would we have been taught it for four and a half centuries? And anyway, the English are quite clearly not an emotional race like some of our continental cousins. We like our churches bright and clean and practical and full of common sense. For this reason, we are brought up to believe that Catholicism is just fundamentally, well … un-English. 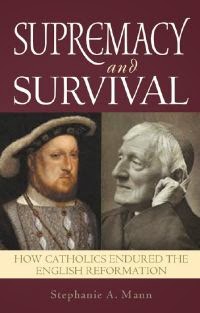 But the last 30 years have seen a revolution in Reformation research. Leading scholars have started looking behind the pronouncements of the religious revolution’s leaders – Henry VIII, Thomas Cromwell, Thomas Cranmer, Hugh Latimer, Nicholas Ridley – and beyond the parliamentary pronouncements and the great sermons. Instead, they have begun focusing on the records left by ordinary English people. This “bottom up” approach to history has undoubtedly been the most exciting development in historical research in the last 50 years. It has taken us away from what the rulers want us to know, and steered us closer towards what actually happened.

I thought this was a particularly well-reasoned analysis of the violence of Henry VIII's imposition of his break from Rome:

The Tudor violence meted out to enforce the break with Rome was extreme, designed to deter by shock. For instance, one of Henry’s earliest victims was Sister Elizabeth Barton, a Benedictine nun. When she criticised Henry’s desire to marry Anne Boleyn, he had her executed, and her head spiked on London Bridge ­— the first and only woman ever to have suffered this posthumous barbarity.

Henry and his inner circle of politicians and radical clerics put to death hundreds of dissenters, pour encourager les autres. None of these people were plotting to kill him or destabilise his rule. Their “treason” was to oppose the destruction of their religion or the despoiling of their property. The brutal strangulation, emasculation, disembowelling, beheading, and quartering they endured as traitors was hideous, as was the total absence of any form of due process or justice.

Henry's use of attainder, meaning that the accused was never tried nor really even knew the charges against them, was brought up in an article by Suzannah Lipscomb in History Today, discussing whether or not Henry VIII was a tyrant:

Yet one of these laws, passed in 1539, ordered that royal proclamations would henceforth have the same status in law as statute. In other words, Henry used Parliament to eradicate the need for it and to make his word – quite literally – law. Similarly he condemned to death, through Parliament, an unprecedented number of people who were available for trial by the use of acts of attainder – acts of Parliament by which the accused was declared guilty and his property and life forfeited without trial or the need to cite precise evidence or name specific crimes. This is how Henry’s fifth wife, Katherine Howard, and first minister, Thomas Cromwell, Earl of Essex, were dispatched.

Blessed Margaret Pole, Blessed Adrian Fortescue, and Blessed Thomas Dingley were also all executed under a Bill of Attainder. They were not plotting to bring down Henry VIII's rule--but all three were wealthy Catholics. Henry was able to seize the treasure of the Knights of Jerusalem and the lands of Countess of Salisbury by bringing them to the block, making up conspiracies out of travels to the Continent and devotion to the Five Wounds of Christ.

But I think Selwood is wrong to ignore the fact that those burned at the stake during the reign of Mary I were not plotting to kill her or "destabilize" her rule either. Cranmer, of course, had been found guilty of treason against the rightful heir, and could have been beheaded. Certainly, the Catholic martyrs of the Elizabethan era who have been beatified and canonized were not plotting against Elizabeth.

Otherwise, Selwood provides an interesting and spirited summary of the revisionist history more or less accepted now about the English Reformation.
Posted by Stephanie A. Mann at 12:30 AM