Blessed Margaret Pole in "The Tablet" 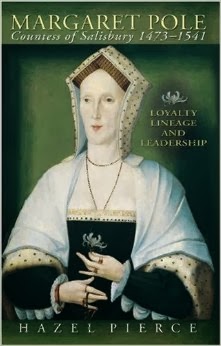 In 1941, The Tablet published this article about Blessed Margaret Pole, executed on May 28, 1541, four hundred years before:

The sixteenth century seems to hive been the era in excelsis of the English Matriarch, and we see her no less in the fiery Bess of Hardwick and the sweet Anne Dacres and a host of supernumeraries than in the widely divergent characters of Mary and Elizabeth. Certainly we have her at her best in the dogged and noble character of the Blessed Countess of Salisbury, who was "prepared to swear by her damnation when it was necessary to enforce a serious point." She has frequently been compared with the Mother of the Machabees, and the parallel is a close one. She saw the physical or mental suffering of many of her children and crowned her endurance with a bloody martyrdom.

This week brings us to the fourth centenary of the execution of this courageous woman. As one of the Henrician martyrs she stands in the same category as the Blessed Carthusians and S. John Fisher and S. Thomas More. By 1541 it seemed that nothing could stem the ruthless drive against those who stood loyal to the Apostolic See ; and she who in his better days had been praised by Henry for her exalted virtues was now abandoned by him in the depth of his depravity to a death so ignominious that the contemporary ambassadorial despatches are eloquent with righteous indignation. . . .

The greatest offence of Blessed Margaret was that she was the mother of the Cardinal, and for that reason she met her death. In November 1538, ten days after the apprehension of two of her sons, Lord Montague of Buckmere and Sir Geoffrey Pole, and others of her kindred who Were executed, the Venerable Countess was herself arrested. Bishop Goodrich of Ely and Admiral Fitzwilliam, later Earl of Southampton and a cousin of Anne Boleyn, were sent to examine her at her own house at Warblington in Hampshire, which was searched from cellar to attic. She had there a considerable establishment, with three chaplains in residence. A few undated Papal Bulls were found on the premises. Her neighbours and tenants were closely questioned, and it was alleged that she had forbidden the latter to read the Bible in English. However, the inquisitors reported to Cromwell that although they had "travailed with her" for many hours she would "nothing utter," and they were forced to conclude that either her sons had left her out of their "treacherous" counsels or else that she was "the most arrant traitress that ever lived." For some time she was a prisoner at Cowdray Park, Sussex, where she suffered many indignities and was constantly invigilated by the Admiral. Finally, she was sent to the Tower which she never again left, and despite her seventy summers managed to endure two years of deprivation in which lack of clothing and nourishment were her chief trials. It was quite suddenly that she was led out to execution, on May 28th, 1541. A splendid Torrigiano tomb had been prepared to receive her mortal remains at Christ Church, but they were not suffered to be placed there and the tomb itself was ruthlessly defaced by Cromwell's own orders.

Beccadelli, later Archbishop of Ragusa and the Boswell of the Cardinal wrote as follows : "I was with Cardinal Pole when he heard of his Mother's death. To me he said 'Hitherto I thought God had given me the grace to be the son of the best and most honourable lady in England, and I gloried in the fact and thanked God for it. Now however he has honoured me still more, and increased my debt of gratitude to Him, for He has made me the son of a Martyr. For her constancy in the Catholic Faith the King has caused her to be publicly beheaded, in spite of her seventy years. Blessed and thanked be God for ever!'

As we often look upon the martyrs as inspiration for how to live and how to die for Jesus and His Church, these lessons, from an article by Celine McCoy on the Catholic Exchange, seem most apt for remembering and modeling Blessed Margaret Pole:

1. Every one of us hopes to die peacefully in our beds, and what else should a 70-year-old widow have expected? She had been a faithful wife, mother, and governess to a princess, loyal to her king in all things except for his unlawful marriage to Anne Boleyn. Perhaps she could have saved her life by keeping quiet or by denying her son’s position against the king. But Margaret remained faithful to her true King; while she suffered on earth, we know that she has been rewarded according to His promise: “Everyone who has left houses, brothers, sisters, father, mother, children, or land for the sake of my name will be repaid a hundred times over, and also inherit eternal life” (Matthew 19:29).

2. Today our lives may not be on the line for our beliefs, but are there opportunities to speak the truth that we are avoiding because we don’t want to lose friends, the respect of our co-workers, or because we fear possible derision? Let us pray to Blessed Margaret to help us calmly and fearlessly stand up for the truth, no matter the cost to ourselves.

Blessed Margaret Pole, pray for us!
Posted by Stephanie A. Mann at 12:30 AM