During David Lean's epic Doctor Zhivago, the doctor/poet and his family escape the city for their country estate (but have to live in the servant's quarters because the local Communist organization has claimed the manor house for the People and the Party). They receive a newspaper with the story about the execution of the Tsar and his entire family and wonder why all of them had to die. Doctor Zhivago states that because it makes it clear there's no going back. 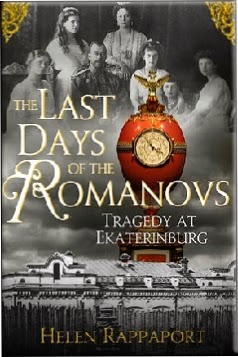 I have read and re-read Helen Rappaport's recounting of the last days of the family at Ekaterinburg and the eventual discovery of their bodies, confirmation of their DNA matches, and canonization as martyrs in the Russian Orthodox Church. In fact, it was the depth of religious feeling that Rappaport uncovered in the family, and in the four daughters especially, that impressed me. Rappaport tells the story of how the family attended their final Divine Liturgy; the priest who sang the service recounted an extraordinary event and changes in the family:

According to the liturgy governing a low Mass, at a determined moment, the following prayer must be read: May the souls of the departed rest in peace with Thy saints. I do not know why he did it, but my deacon, instead of merely reading the prayer, began to chant it. [This prayer is never sung except at funerals.] I followed suit, though somewhat irritated at his violation of the canons. We had barely begun when we heard, behind us, the noise of the whole imperial family throwing themselves on their knees.... At the end of the service they all approached to kiss the Cross and the deacon gave the Blessed Bread to both Emperor and Empress.... The deacon and I left in silence.... Suddenly, in front of the School of Fine Arts, the deacon said to me, Do you know, something has happened to them. As his words corresponded exactly to what I was, thinking, I stopped and asked him why he thought so. I am sure, he said; they seem so changed, and not one of them sang today. He was right, because for the first time, on July 14, not one of the Romanovs accompanied us by singing. 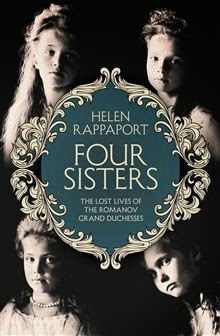 In her new book, Four Sisters: The Lost Lives of the Romanov Grand Duchesses, Helen Rappaport focuses on Olga, Tatiana, Maria, and Anastasia, the young women who were horribly murdered in the cellar at Ekaterinburg on July 7, 1918. The author was interviewed in the April issue of the BBC History Magazine and commented on how devoutly Christian the four sisters were.

The four captivating young Romanov sisters were perhaps the most photographed and talked about young royals of the early twentieth century. And with good reason; they were much admired for their happy dispositions, their looks, and their devotion to their parents and sick brother. From an early age they were inevitably at the centre of unceasing gossip about the dynastic marriages they might make. But who were they really beyond the saccharine image perpetuated by those now familiar photographs of them as pretty girls in white dresses and big hats? What were their personal hopes, dreams and aspirations and how did they interact with each other and with their parents? What was life really like within the highly insular Imperial Family and how did they really feel about their mother’s obsessive and all consuming love for their spoilt brother Alexey?

Over the years, the story of the four Romanov sisters and their tragic end in a basement at Ekaterinburg in 1918 has clouded our view of them, leading to a mass of sentimental and idealized hagiography. They are too often seen merely as set dressing, the beautiful but innocuous background to the bigger, more dramatic story of their parents – Russia’s last Tsar and Tsarina, Nicholas and Alexandra. They are perceived as lovely, desirable and living charmed lives. But the truth is somewhat different.

For most of their short lives the four Romanov sisters were beautiful birds in a gilded cage, shut away at their palaces at Tsarskoe Selo or Livadia as a reaction to the fear of terrorist attacks on the Imperial Family. In reality the sisters had few friends and were largely cut off from the real world outside and the normal life experiences of other girls – that is, until everything changed in 1914. Suddenly, with Russia’s entry into the war, the girls had to grow up fast.

In a deliberate echo of the title of Chekhov’s play, Four Sisters sets out to capture the joy as well as the insecurities and poignancy of those young lives against the backdrop of the dying days of late Imperial Russia, drawing on previously unseen and unpublished letters, diaries and memoirs of the period.

The book is also the subject of a forthcoming documentary ‘Russia’s Lost Princesses’, which the author has been working on with Silver River Productions for BBC2. A transmission date will be announced soon.

The book is scheduled for release in the USA in June from St. Martin's Press (with a different, less Chekhovian title: The Romanov Sisters). It looks like an interesting book, although it seems from reviews in the U.K. that the book reveals more about the Tsarina, Alexandra Feodorovna and her control over the family, than it does about the four daughters (between 17 and 22 when they were murdered). That's certainly the view of the reviewer in The Telegraph. The reviewer in The Guardian notes the same "family dynamic" but also that the entire royal family would have been so much happier if they hadn't been reigning over the Russian Empire (the Tsar's dream is to be a farmer in England!):

Olga, Tatiana, Maria and Anastasia are bright, wilful girls who are devoted to their parents and to their precious little brother Alexey. The tsarevitch appeared just when Nicholas was despairing of ever providing the country with a male heir, and the girls grow up conspiring to keep his constantly life-endangering haemophilia a secret from the nation. Anxious to protect her son and fearing the moral iniquity of St Petersburg society, Alexandra keeps her children secluded in their countryside palace. The "girlies" (as Alexandra persists in calling them) long for news of "outside life" but have little interest in court intrigues. They are delighted when they can wander around an English village with money of their own to spend.

For all four sisters, the ideal life would be one of quiet middle-class domesticity with a soldier husband. Infantilised by Alexandra, they are allowed to run wild with the soldiers who escort them on their annual holiday to Crimea. Even as teenagers, they play boisterous games of hide and seek with the handsome young officers; at one stage 10 people crammed into a wardrobe. Everything changes in the first world war when Alexandra, Olga and Tatiana train as nurses (typically modest, they take the titles of Sister Romanova numbers 1, 2 and 3). Now at last the girls have the contact with the outside world they have longed for as they change dressings and help with operations. But again it's the ordinariness they most love. "It's only at our hospital that we feel comfortable and at ease," Olga tells one of her patients.

As both reviewers note, since we know the end of the story, these young, beautiful lives are very sad in their promise and its thwarting.
Posted by Stephanie A. Mann at 12:30 AM

Email ThisBlogThis!Share to TwitterShare to FacebookShare to Pinterest
Labels: biographies, books, Helen Rappaport, The Four Sisters, The Last of the Romanovs, The Romanovs, the Russian Revolution