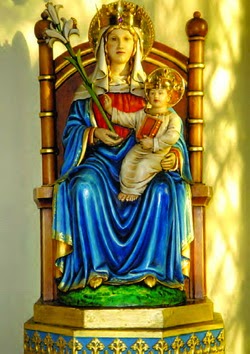 In addition to the "Called to be One" effort at evangelization and growth of the Personal Ordinariate of Our Lady of Walsingham this September, there will be an "Ordinariate Festival". The New Liturgical Movement blog posts the details:

The Personal Ordinariate of Our Lady of Walsingham is to hold its first "Ordinariate Festival" in September this year. The guest of honour will be Cardinal Vincent Nichols, Archbishop of Westminster and head of the Roman Catholic Church in England and Wales, who will deliver an address on the how the Ordinariate fits in to the life and mission of the wider Catholic Church in the United Kingdom. The festival, which will run over the weekend of Friday 19 September to Sunday 21 September, is expected to be the biggest gathering of clergy and faithful from the more than forty Ordinariate groups across the country, since the Ordinariate was established in the UK in January 2011.

The proceedings will begin on the evening of Friday 19 September with a reception at the home of the Ordinary, the Rt Revd Mgr Keith Newton and his wife, Gill, in Golden Square, Soho, which adjoins the Ordinariate's central church, Our Lady of the Assumption and St Gregory, Warwick Street. The main events will be on Saturday, 20 September, organised around Mass in Westminster Cathedral at 12.30. Before the Mass, Ordinariate groups will give presentations on aspects of their mission. In the afternoon Cardinal Nichols and the Ordinary will speak. The Ordinariate clergy and faithful will be encouraged to stay on in London so that they can attend the 103.30 Sung Mass on Sunday 21 September at Our Lady of the Assumption and St Gregory.

The Ordinary of the Ordinariate, Monsignor Keith Newton, has made his own comments on the role of his special "diocese" in re-evangelizing England (which even the former Archbishop of Canterbury Rowan Williams has admitted is not a Christian country--in spite of an establishment church!) in the Friends of the Ordinariate Newsletter:

The Ordinary of the Personal Ordinariate of Our Lady of Walsingham Monsignor Keith Newton, has said the Ordinariate has a unique part to play in the New Evangelisation because of the way it "brings into modern Catholicism an ancient British expression of Christian life".

Writing in the Friends of the Ordinariate's Eastertide Newsletter, Mgr Newton quotes the words of Pope Francis in his Apostolic Exhortation, Evangelii Gaudium, in which the Holy Father says that it is through the diversity of the countless people who have received and passed on the grace of faith "in the language of their own culture" that the Church expresses her genuine catholicity and shows forth the "beauty of her varied face".

Mgr Newton writes: "For centuries, a particularly English and ancient culture of Catholic truth has been treasured and guarded within the Church of England, while Anglicanism itself is interwoven into the culture of British society". The Ordinariate, Mgr Newton goes on, is a tool of profound importance in the New Evangelisation because it provides a bridge between the Catholic Church and deeply rooted elements of British religious culture.

Read the rest of his comments here in the newsletter.
Posted by Stephanie A. Mann at 12:30 AM

Email ThisBlogThis!Share to TwitterShare to FacebookShare to Pinterest
Labels: Anglicanorum Coetibus, Cardinal Vincent Nichols, Our Lady of Walsingham Ordinariate, the Church of England