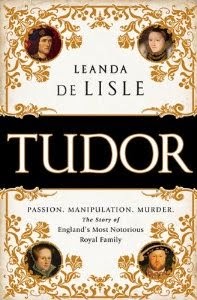 Leanda de Lisle, author of Tudor: Passion. Manipulation. Murder. The Story of England's Most Notorious Royal Family (the U.S. title) considers what could have happened if Henry VIII would have been granted the decree of nullity he sought:

In 1533, Henry VIII broke with Rome and claimed power over Church and state in England. This enabled him to get the marriage annulment Pope Clement VII had denied him. But what if Clement had overcome the great doctrinal obstacles of Catholic teaching and granted it? Would there have been a Protestant Reformation in England? And how might the history of the dynasty have then unfolded?

In 1527, when Henry first requested his annulment, he and his people were among the most contented Catholics in Europe, and loyal to the papacy. Henry had even written a book (with some help) condemning Luther’s attacks on papal authority. But Henry had long believed himself to be more than a mere secular monarch. Granted his annulment he would not have broken with Rome, but his ego would still have needed to be satisfied in this regard.

It would have pleased Henry to see the humanist scholar John Fisher made a cardinal and invited to the Council of Trent in 1535 (as Fisher was, shortly before being executed for his loyalty to Rome). Through Fisher, and later English cardinals, England would have helped shape the reformation of the Catholic Church. At home, the price of Henry’s loyalty would have been an Anglican Church, in communion with Rome, building on its own traditions, with the crown exercising greater power in the appointment of bishops, a concession granted to the kings of France.

Henry would have continued to take part in public discussions on theology, closed failing monasteries and addressed superstitious practises, in line with his humanist Catholic ideals. There would have been no Pilgrimage of Grace—the great rebellion in England triggered by opposition to the Reformation. But Henry would still have confronted “heretics” especially in areas with close trading contacts with Europe (he burned Lutherans until he died).

I find that note about Bishop John Fisher at the Council of Trent fascinating. As I read John O'Malley's book on that great council, I was surprised at how actively Henry VIII opposed the convening of it, because he and his ally King Francis I were determined to thwart their common enemy, the Emperor Charles V.

She also has some interesting "counter facts" about the reign of Henry VIII's son and heir by Anne Boleyn, Henry IX, and his cooperation with Reginald Cardinal Pole, were the latter elected pope as he almost was in 1550:

The Tudors were conservative and ruthless in temperament, and had Reginald Pole been elected Pope in 1550, as he nearly was, he could have persuaded Henry IX to institute an Inquisition to police orthodoxy in England. Henry’s kingdom would thus have been spared France’s Wars of Religion. But disgust at the suffering of fellow countrymen burned at the stake would also fuel English anticlericalism. This Henry IX would have exploited in any quarrels with the Pope on matters of ecclesiastical authority, a cause close to Pole’s heart, and one over which English kings had quarrelled with popes before.

In other areas, however, Pole and Henry IX would have continued to find agreement. On reform, Henry IX, influenced by his Boleyn inheritance, but also backed by Pole, would commission an orthodox bible in English (as Mary I actually did). In 1560 Henry IX would have helped to crush the Protestant Reformation in Scotland, a country eventually absorbed by dynastic marriage, and conquest, with future Tudors encouraging elite marriages with Scottish and Irish families to create a sense of Britain.

Read the rest here--what do you think?
Posted by Stephanie A. Mann at 12:30 AM