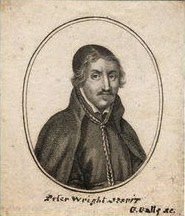 Blessed Peter Wright was a Jesuit martyr in England. Born in Slipton, Northamptonshire, England in 1603, Peter reverted to Catholicism after deserting from the English army on the Continent and was trained for the priesthood in Ghent and Rome. Entering the Jesuits in 1629, he taught at St Omers and then he ministered to English Catholics soldiers fighting for the King of Spain in Flanders/the Spanish Netherlands and accompanied Sir Henry Gage back to England. He also served as a chaplain to the Royalist army during the English Civil War at Oxford first with Sir Henry Gage and then with John Paulet, the 5th Marquess of Winchester. After the war, he was arrested at the home of the Paulet on Candlemas, February 2, 1651--thus sharing an arrest date with St. Anne Line--and imprisoned in Newgate. During his trial, the late Henry Gage's brother Thomas presented evidence that Wright was a priest and thus had violated the Elizabeth statutes against Catholic priests in England, so he was sentenced to death by hanging, drawing, and quartering. (Note that Thomas had been ordained a priest in the order of preachers, the Dominicans--and that Thomas had aided officials in the condemnation of three other priests: the Jesuit Thomas Holland in 1642, the Franciscan Francis Bell in 1643, and the Jesuit Ralph Corby in 1644--he was a busy informant.)

Gentlemen, this is a short passage to eternity; my time is now short, and I have not much to speak. I was brought hither charged with no other crime but being a priest. I willingly confess I am a priest; I confess I am a Catholic; I confess I am a religious man of the Society of Jesus, or as you call it, a Jesuit.

This is the cause for which I die; for this alone was I condemned, and for propagating the Catholic faith, which is spread through the whole world, taught through all ages from Christ's time, and will be taught for all ages to come.

For this cause I most willingly sacrifice my life, and would die a thousand times for the same if it were necessary; and I look upon it my greatest happiness, that my most good God has chosen me most unworthy to this blessed lot, the lot of the saints. This is a grace which so unworthy a sinner could scarce have wished, much less hoped for. And now I beg of the goodness of my God with all the fervour I am able, and most humbly entreat Him that He would drive from you that are Protestants the darkness of error, and enlighten your minds with the rays of truth. And as for you Catholics, my fellow soldiers and comrades, as many of you as are here I earnestly beseech you to join in prayer for me and with me till my last moment; and when I shall come to Heaven I will do as much for you. God bless you all; I forgive all men. From my heart I bid you all farewell till we meet in a happy eternity.
Posted by Stephanie A. Mann at 12:30 AM