Stations of the Cross in the Easter Season

The Church of the Blessed Sacrament recently acquired and restored a set of Stations of the Cross that had once been in the Cathedral of the Immaculate Conception here in Wichita, Kansas. Some parishioners hung them in the church on Friday last week and I went to pray the Stations of the Cross that afternoon. They replaced a set of stations that depicted just the face of Jesus at each station--so where before we had a rather minimalist interpretation of the Way of the Cross, now we have a set of dramatic vignettes. These new/old stations show each scene with Jesus at the center, of course, but with many other characters in the background or the foreground.

After I prayed the Stations, I went back around to take some pictures in the available light of the late afternoon (in a church on a north/south axis) with my husband's Canon S95. The pictures that turned out best, because of the angle at which I was taking them (perhaps four feet above my head), were those in which I zoomed in on a portion of the scene. As I viewed and re-viewed these stations, I noticed these details. From the Seventh Station: Jesus Falls the Second Time, see the dog growling at Jesus: 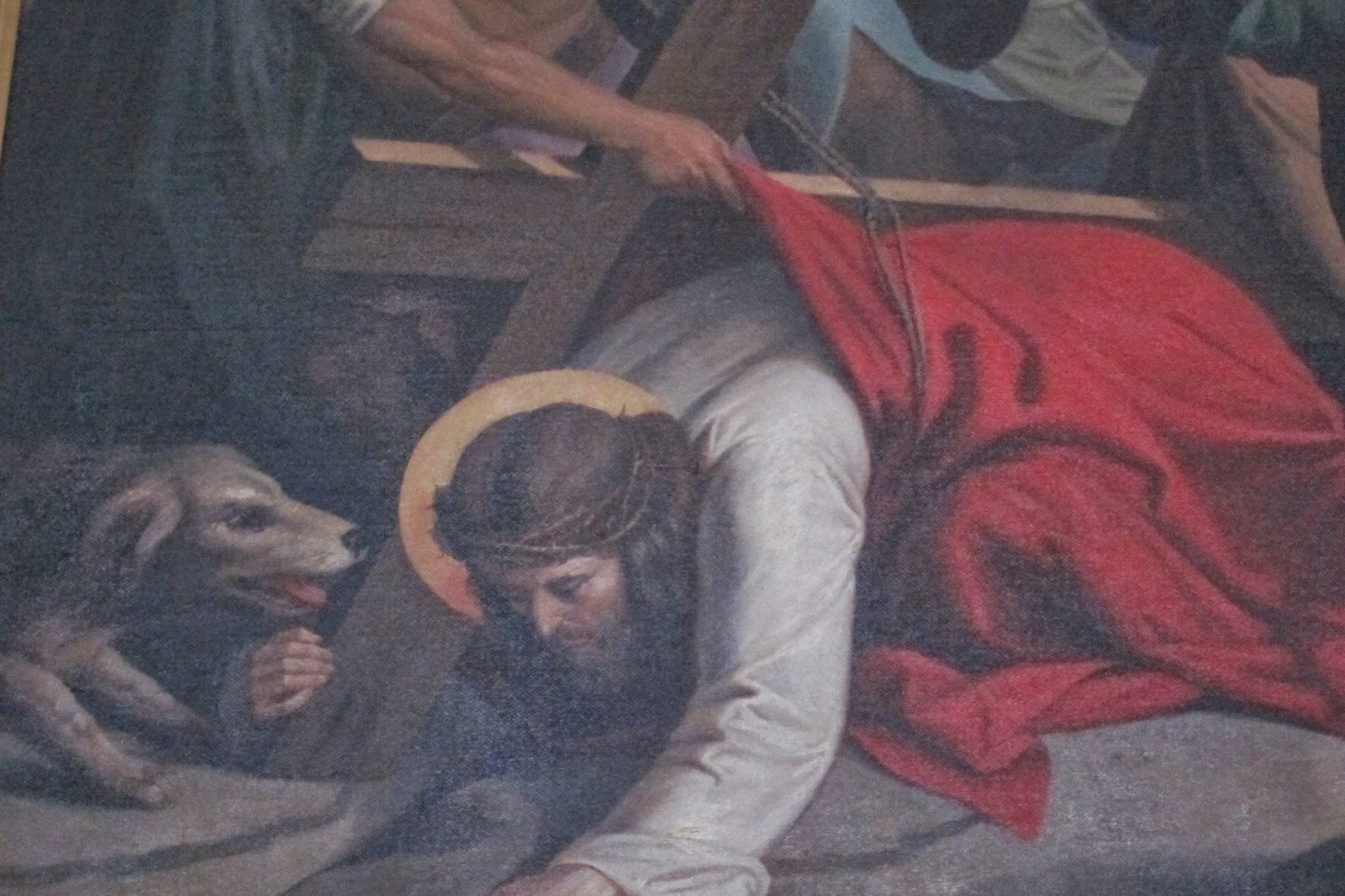 This was in the darkest part of the church in the late afternoon so it's a little grainy. From the Eighth Station: Jesus Meets the Women of Jerusalem: He stretches out His hand in blessing even as the soldiers are moving on from this meeting:﻿
﻿ 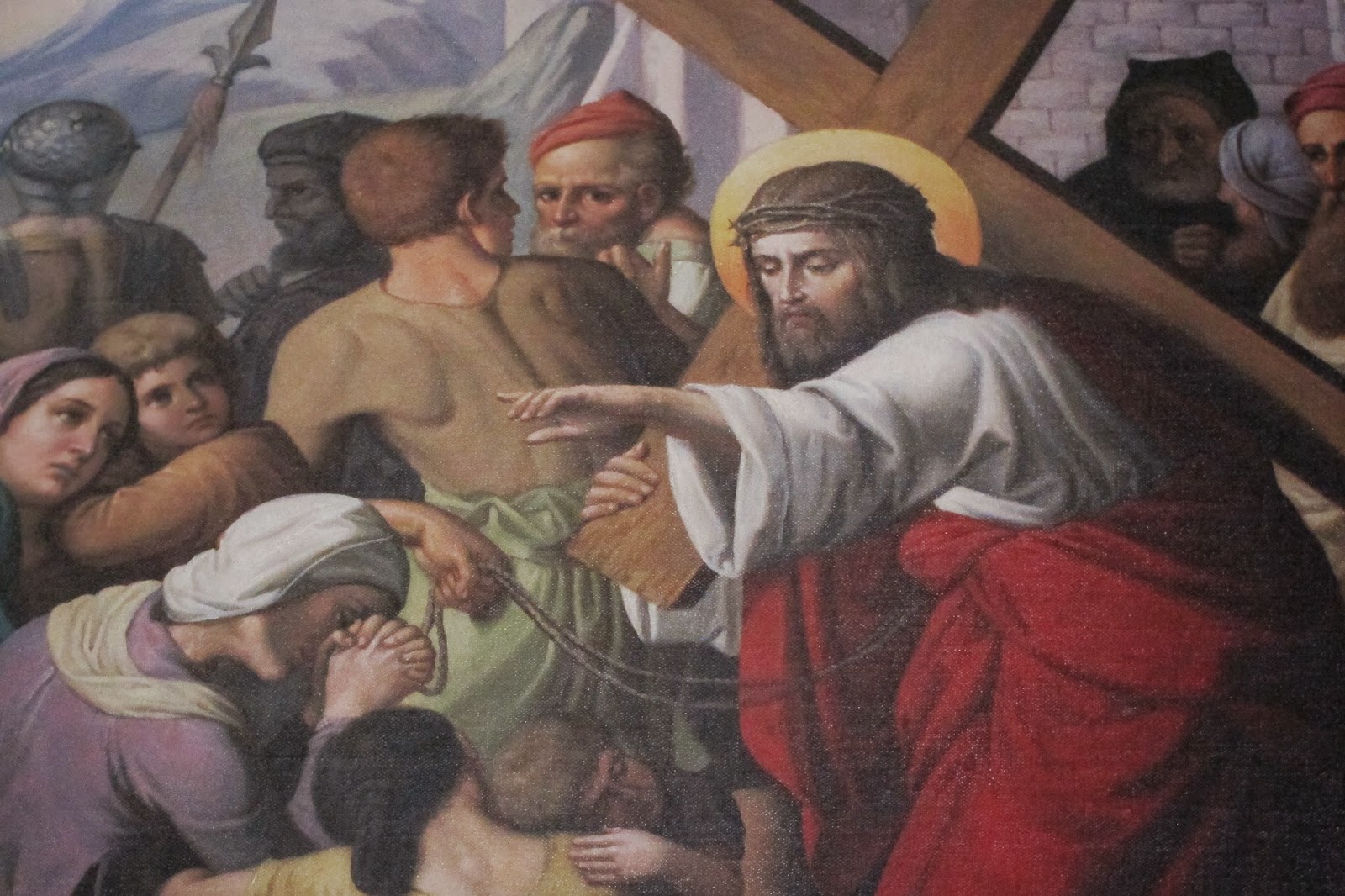 The sky in the background of the Tenth Station, Jesus is Stripped of His Garments, is beautiful: 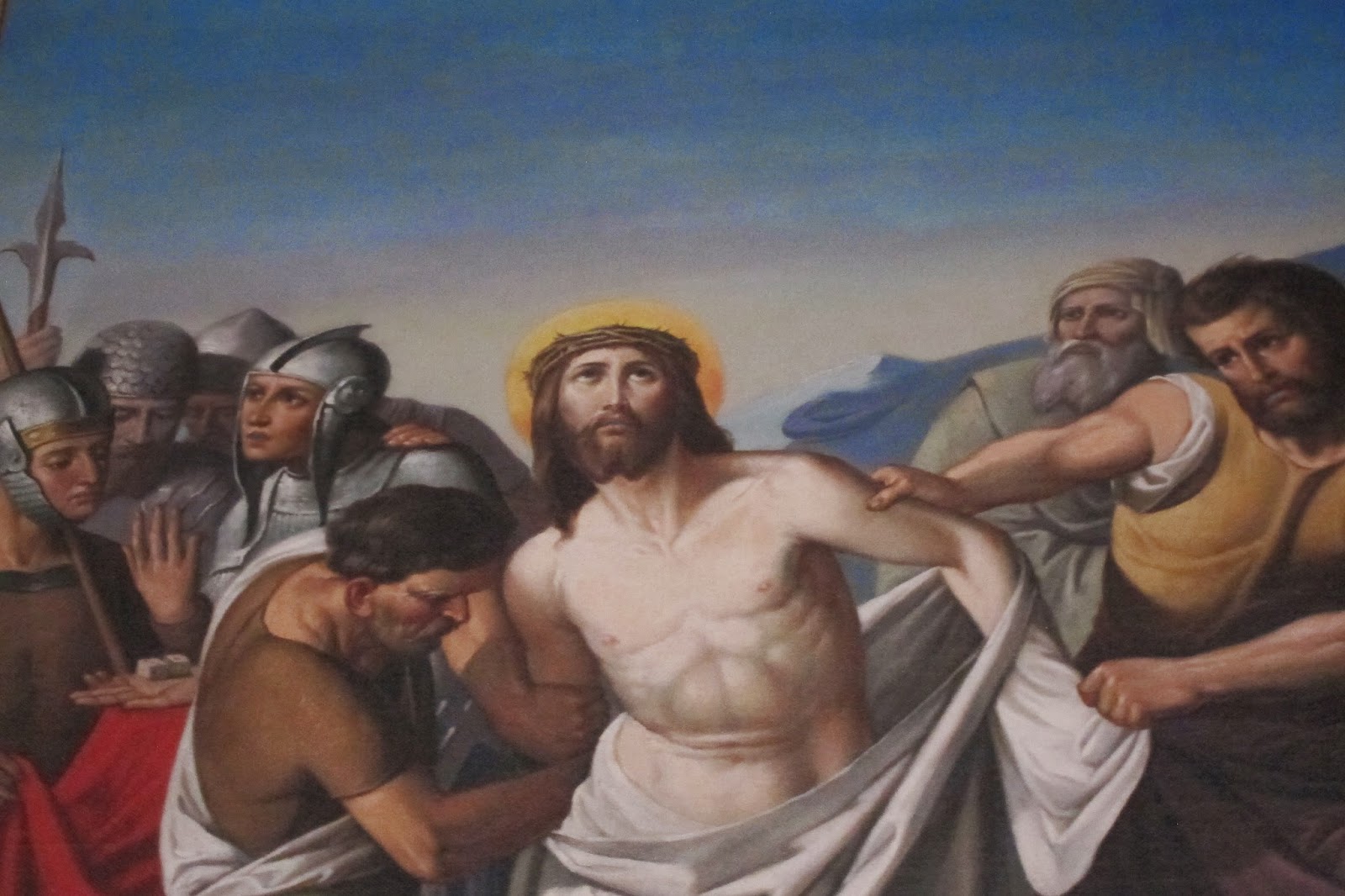 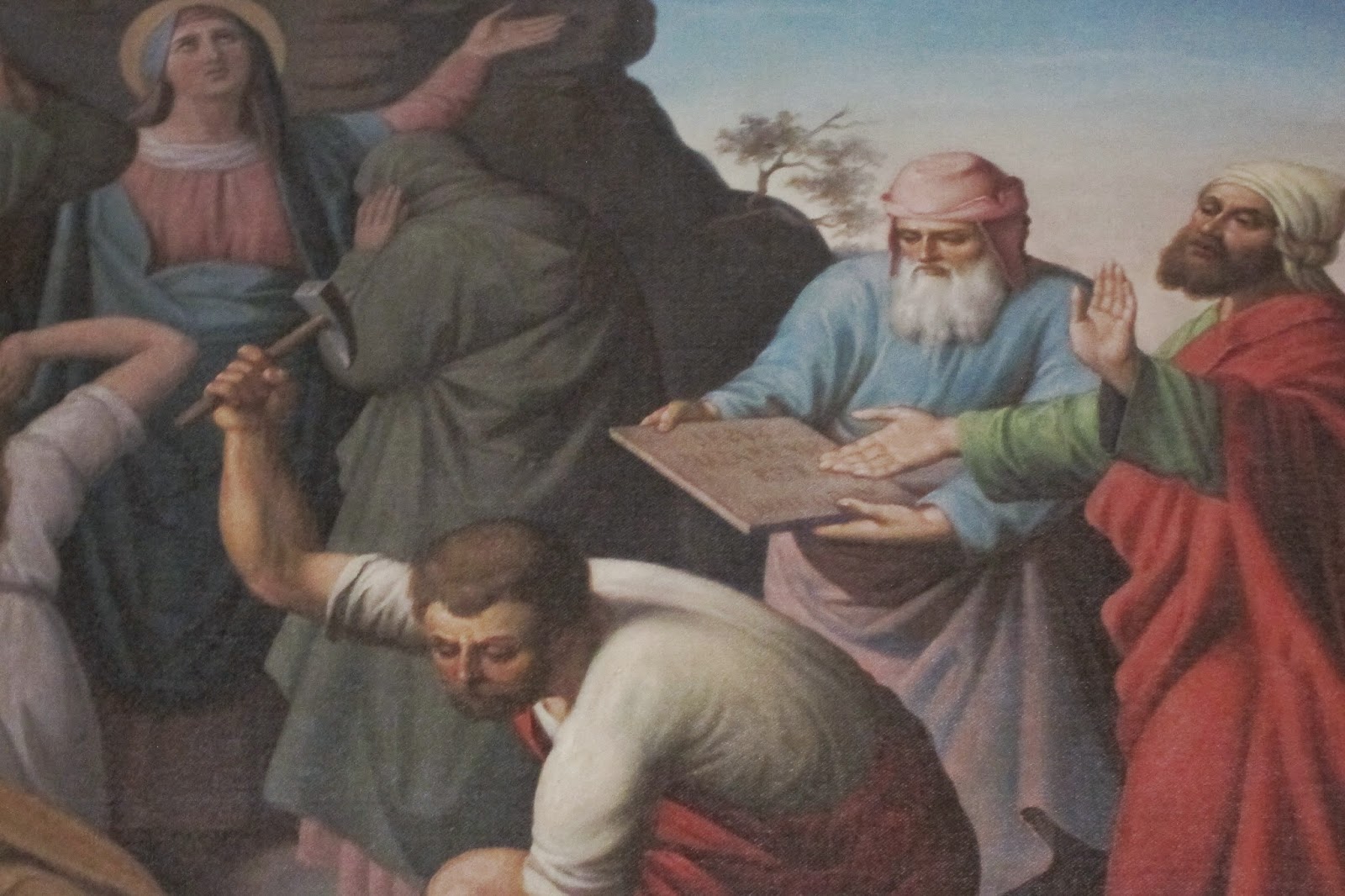 Joseph of Arimathea and Nicodemus consult in the background as the Blessed Virgin Mary, St. John, and St. Mary Magdalen mourn the death of Jesus in the Deposition station (the Thirteenth Station): 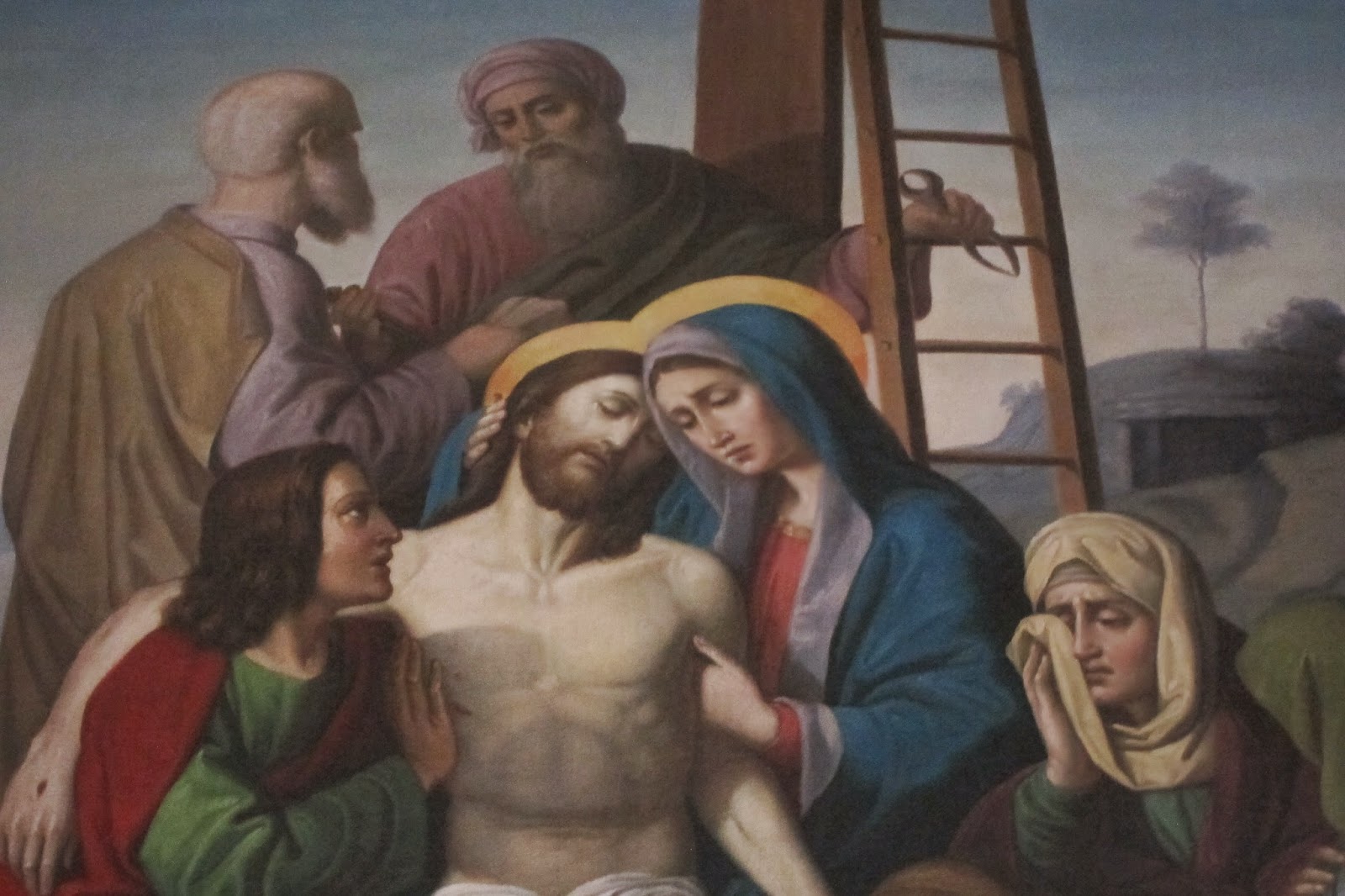 I think these Stations of the Cross complement the stained glass windows above them which depict different parables from the Gospels. The general style of garments and the colors in both the windows and the paintings match well.
It can seem strange to pray the Stations of the Cross and meditate on Christ's Passion and Death during the Easter Season, but it is true that without Good Friday there can be no Easter Sunday and without Easter Sunday, Good Friday has no meaning or purpose. Throughout the Easter Season, the readings from the Acts of the Apostles describe how St. Peter and the Apostles, and St. Paul preach how Jesus was crucified, died, and rose from the dead--and is alive, the Savior of the world!
Posted by Stephanie A. Mann at 12:30 AM