The Blessed Martyrs of Compiegne

From my article published in the July/August 2013 issue of OSV's The Catholic Answer Magazine, based on a mini-pilgrimage I took while in Paris in 2010:

A visitor in Paris today might arrive at the Place de la Nation, a hub of transportation and commerce on the right bank of the Seine River, and never know about the revolutionary deeds of blood committed there.

Restaurants, taxis and buses ring around the Place de la Nation and its statue depicting Marianne, the symbol of the Republic, while locals walk their dogs in the park. But here, in the last hot summer of the French Revolution’s Reign of Terror, on July 17, 1794, 14 nuns, three lay sisters and two servants of the Carmelite house of Compiègne died for their Catholic faith.

What brought them to such a bloody end beneath the blade of the guillotine the day after the feast of Our Lady of Mount Carmel?

The answer might be surprising if we presume the ideals of liberty, fraternity and equality truly summarize the spirit of the French Revolution. After the fall of the traditional, absolute monarchy and the rise of the National Assembly with a constitutional monarchy in 1789, the state attacked the Catholic Church, confiscating churches and closing convents. . . .

For pilgrims seeking to walk the path of the Carmelites, after leaving the whirl of the Place de la Nation, they should walk to Cimitière de Picpus where the Carmelites are buried in one of the two mass graves behind the wall next to the family tombs. The opening hours are limited, the entrance fee is only two euros, and it is far off the tourist track.

But it is peaceful and apart, perfect for a traveler who wants to be a pilgrim in Paris, contemplating the mystery and the glory of martyrdom. 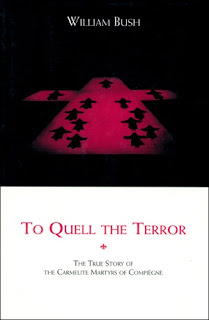 Recounts the dramatic true story of the Discalced Carmelite nuns of Compiègne, martyred during the French Revolution's "Great Terror," and known to the world through their fictional representation in Gertrud von Le Fort's Song at the Scaffoldand Francis Poulenc's Dialogues of the Carmelites. Includes index and 15 photos.
At the height of the French Revolution's "Great Terror," a community of sixteen Carmelite nuns from Compiègne offered their lives to restore peace to the church and to France. Ten days after their deaths by the guillotine, Robespierre fell, and with his execution on the same scaffold the Reign of Terror effectively ended. Had God thus accepted and used the Carmelites' generous self-gift?Through Gertrud von Le Fort's modern novella, Song at the Scaffold, and Francis Poulenc's famed opera, Dialogues of the Carmelites, (with its libretto by Georges Bernanos), modern audiences around the world have become captivated by the mysterious destiny of these Compiègne martyrs, Blessed Teresa of St. Augustine and her companions. Now, for the first time in English, William Bush explores at length the facts behind the fictional representations, and reflects on their spiritual significance. Based on years of research, this book recounts in lively detail virtually all that is known of the life and background of each of the martyrs, as well as the troubled times in which they lived. The Compiègne Carmelites, sustained by their remarkable prioress, emerge as distinct individuals, struggling as Christians to understand and respond to an awesome calling, relying not on their own strength but on the mercy of God and the guiding hand of Providence.
Posted by Stephanie A. Mann at 12:30 AM

Email ThisBlogThis!Share to TwitterShare to FacebookShare to Pinterest
Labels: Blessed Martyrs of Compiegne, on pilgrimage in Paris, OSV's The Catholic Answer Magazine, The French Revolution, To Quell the Terror