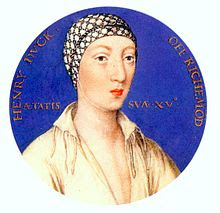 Henry VIII's illegitimate son Henry Fitzroy died on July 23, 1536. He was Henry's son by Elizabeth Blount, born in 1519 and Henry had bestowed many honors and much wealth upon him: the Order of the Garter; titles such as the Earl of Nottingham, Duke of Richmond and Somerset, Admiral of England, Ireland, and Normandy, and Lord Lieutenant of Ireland--these offices and titles made him very rich. His birth and survival was a sign to Henry that it was not his fault none of the sons borne by Katherine of Aragon survived.

In 1533 he married Mary Howard, daughter of Thomas Howard, the Duke of Norfolk. Henry Fitzroy died just when Henry VIII was considering naming him his heir, in spite of his illegitimacy, since he had no other son to succeed him. Fitzroy witnessed the executions of the Carthusians and of Anne Boleyn; we have no information about what he thought of the religious changes going on around him.

As this site notes, however, those changes would soon affect him--or at least his mortal remains--because his had to be moved a few years later:

In early July, 1536, Richmond was reported to be ill with pains in his chest and a cough, which was diagnosed as consumption (usually identified as tuberculosis), he died at the age of seventeen at St. James's Palace on 23 July 1536.

His father-in-law, the Duke of Norfolk issued orders that the body be wrapped in lead and taken in a closed cart for secret interment, in the Cluniac priory of Thetford. The only mourners were two attendants who followed at a distance. His young widow Mary Howard was refused a pension by the King, as the couple were so young it is doubtful that the marriage had ever been consummated. At the Dissolution of the Monasteries his body was moved to Framlingham Church in Suffolk. His wife, Mary Howard, was also buried in his ornate tomb after her death in 1557. 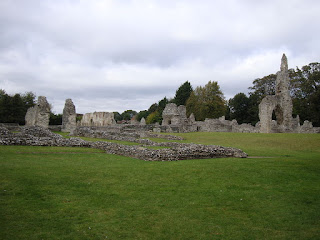 The Howard family did not want to see their family members moved from their resting place, according to British History Online:

The Duke of Norfolk, the powerful patron of Thetford Priory, naturally looked with dismay upon the approaching destruction of this house and of the church, where not only his remote but more immediate ancestors had been honourably interred. His father, Sir Thomas Howard, earl of Surrey and duke of Norfolk, who died on 21 May, 1524, was buried before the high altar of the conventual church, where a costly monument to himself and Agnes his wife had been erected; whilst still more recently, in 1536, Henry Fitzroy, duke of Somerset, had been buried in the same place. As a means of preserving the church and establishment, the duke proposed to convert the priory into a church of secular canons, with a dean and chapter. In 1539 he petitioned the king to that effect, stating that there lay buried in that church the bodies of the Duke of Richmond, the king's natural son; the duke's late wife, Lady Anne, aunt to his highness; the late Duke of Norfolk and other of his ancestors; and that he was setting up tombs for himself and the duke of Richmond which would cost £400. He also promised to make it ' a very honest parish church.' At first the king gave ear to the proposal, and Thetford was included in a list with five others, of ' collegiate churches newly to be made and erected by the king.' Whereupon the duke had articles of a thorough scheme drawn up for insertion in the expected letters patent, whereby the monastery was to be translated into a dean and chapter. The dean was to be Prior William, (fn. 50) and the six prebendaries and eight secular canons were to be the monks of the former house, whose names are set forth in detail. The nomination of the dean was to rest with the duke and his heirs. The scheme included the appointment by the dean and chapter of a doctor or bachelor of divinity as preacher in the house, with a stipend of £20. (fn. 51).

But the capricious king changed his mind, and insisted on the absolute dissolution of the priory. The duke found that further resistance was hopeless, and on 16 February, 1540, Prior William and thirteen monks signed a deed of surrender. (fn. 52) Two months later the site and the whole possessions of the priory passed to the Duke of Norfolk for £1,000, and by the service of a knight's fee and an annual rental of £59 5s. 1d. The bones of Henry's natural son, and of the late Duke of Norfolk and others, together with their tombs, were removed to a newly erected chancel of the Suffolk church of Framingham, and the grand church of St. Mary of Thetford speedily went to decay.

More about the Howard family tombs here. St. Michael's in Framingham has more information about Henry Fitzroy on its "Historical Tombs" page, including this sad comment: "The responsibility for FitzRoy's burial was placed upon Norfolk by the King who seems to have lost interest in his son, once dead."