A Visit to a Site of Martyrdom 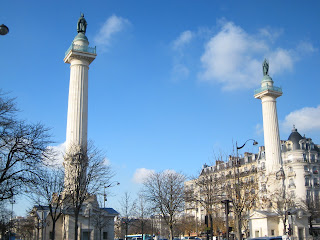 Last Tuesday while in Paris, I visited Place de la Nation, the site of the guillotine near the end of the Terror. There the Carmelites of Compiegne were executed within sight of the great Avenue du Trone. On either side of the Avenue du Trone there are tall pillars with statues of St. Louis and Louis-Augustus, the great crusading kings of France. The kings of France would enter along this avenue into Paris to the Place du Trone.

During the Revolution, the Place du Trone was renamed Place du Trone Renverse (turned upside down) demonstrating the fall of the monarchy. The sixteen Carmelites were executed there on Jully 17, 1794. There bodies were then transported to Cimitiere Picpus and dumped into one of two mass graves there. 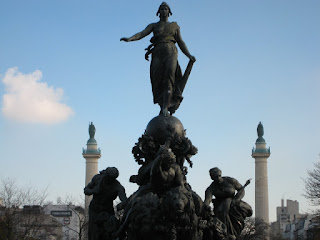 I walked along Avenue du Trone to take a couple of pictures of the statues; then returned to the Place de la Nation to photograph the statue of the Republic in the center of the circle. After lunch at one of the restaurants ringing the Place I walked to Cimitiere Picpus, one of very people visiting during their open hours that mardi, starting at 2 p.m. I pushed a button to open the gates and stepped inside. 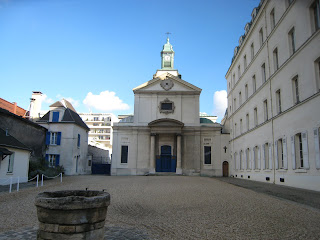 Upon entry I saw the chapel straight ahead with a very neatly raked secton of gravel between an old well and the church steps. There was no caretaker present so I entered the chapel. Inside the rather spartan chapel, two huge tablets on either side of the altar displayed the names of the guillotine's victims. (This picture may be a little a dark, but it gives you an idea how massive these lists are). 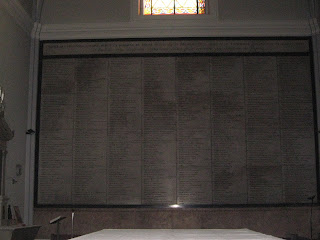 When I came out, the caretaker and his little jack russell terrier greeted me. The former requested I pay two euros to enter the cemetery and gave me a little flyer with a map. The latter sniffed at my skirt and heels and asked, "Who are these dogs? Where are these dogs?" until his master called him off.
While I toured the cemetery, I heard the laughter of children at playtime in the school next door--and the racket of some construction in the area. Inside the cemetery grounds, leaves and broken branches covered the pathways, creating an eternal stillness. I found the memorial to the Carmelite martyrs, the grave of Lafayette ("Lafayette, we are here!"), the door through which the bodies were brought, and many other interesting monuments.
Please see tomorrow's post for more.
Posted by Stephanie A. Mann at 2:02 AM