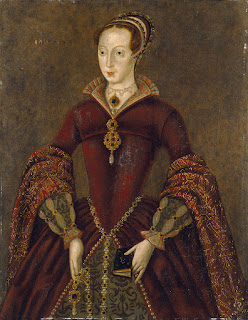 After only nine days as the monarch of England, Lady Jane Grey is deposed in favor of her cousin Mary. The 15-year-old Lady Jane, beautiful and intelligent, had only reluctantly agreed to be put on the throne. The decision would result in her execution.

Lady Jane Grey was the great-granddaughter of King Henry VII and the cousin of King Edward VI. Lady Jane and Edward were the same age, and they had almost been married in 1549. In May 1553 she was married to Lord Guildford Dudley, the son of John Dudley, the duke of Northumberland. When King Edward fell deathly ill with tuberculosis soon after, Jane’s father-in-law, John Dudley persuaded the dying king that Jane, a Protestant, should be chosen the royal successor over Edward’s half-sister Mary, a Catholic. On July 6, 1553, Edward died, and four days later Lady Jane Grey was proclaimed queen of England.

Lady Jane’s ascendance was supported by the Royal Council, but the populace supported Mary, the rightful heir. Two days into Lady Jane’s reign, Dudley departed London with an army to suppress Mary’s forces, and in his absence the Council declared him a traitor and Mary the queen, ending Jane’s nine-day reign.

Author Samantha Wilcoxon writes about why we don't refer to Lady Jane Grey as Queen Jane:

A recent post of mine brought questions to the forefront regarding Lady Jane Grey's status as a Tudor queen. I included her in my list of monarchs but noted that she is not always included in others. This list, for example, mentions her only parenthetically. Jane is referred to as a ruler by Royal.UK, but is still listed by the name Lady Jane Grey. In fact, we most commonly refer to her as Lady Jane Grey rather than Queen Jane.

Why is that? She had not had a coronation, but there are other examples of monarchs who have been accepted as such despite the lack of this ceremony. Edward V is a notable example quite close to Jane's time. Little Edward is never left out of discussions of England's kings though he ruled even less than his distant cousin Jane did.

Jane was proclaimed and deposed with lightening speed, causing some to refer to her as an unsuccessful usurper rather than a legal queen.

Image credit: the Streatham Portrait, discovered in 2005/2006, as noted by The Guardian:

Queen of England for nine days, then dispatched by the axeman at the Tower of London at the age of just 17, Lady Jane Grey and her tragic story have exerted a deep fascination for centuries. She is the only English monarch since 1500 of whom no portrait survives. Or so it has long been assumed.

But experts are now claiming that a painting that hung for years in a house in Streatham, south-west London, is of Lady Jane. The owner inherited the work from his great-grandfather, a collector of 16th-century antiques.

A pawn in the ambitious power games of her parents and father-in-law, Lady Jane was briefly queen after the death of her cousin Edward VI - until her short rule from the Tower of London was transformed into imprisonment when Mary I successfully claimed the throne.

Were this a painting of Lady Jane, it would satisfy a centuries-old hunger to know the appearance of this unfortunate teenager, described at the time as "prettily shaped and graceful" with a "gracious and animated figure". . . .

The "new" portrait, which experts have confidently dated to the second half of the 16th century, shows a slender young woman in an opulent gown and jewels, a book held in her left hand. Above her shoulder is a faint inscription reading "Lady Jayne". The costume she wears was in fashion in the early 1550s; Jane was queen in 1553.

There was quite a debate about whether or not this was a portrait of Lady Jane Grey; David Starkey rejected it. Eric Ives, evidently, accepted its validity enough to have it used on the cover of his 2009 book:

Lady Jane Grey, (sic) is one of the most elusive and tragic characters in English history.

In July 1553 the death of the childless Edward VI threw the Tudor dynasty into crisis. On Edward's instructions his cousin Jane Grey was proclaimed queen, only to be ousted 13 days later by his illegitimate half sister Mary and later beheaded. In this radical reassessment, Eric Ives rejects traditional portraits of Jane both as hapless victim of political intrigue or Protestant martyr. Instead he presents her as an accomplished young woman with a fierce personal integrity. The result is a compelling dissection by a master historian and storyteller of one of history’s most shocking injustices.
Posted by Stephanie A. Mann at 12:30 AM