The Benedictines in England: Down to One Man 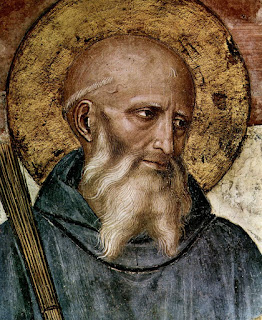 As today is the feast of St. Benedict, one of the patron saints of Europe, it's appropriate to reflect on the Benedictine order in England, before and after the English Reformation. Of course, the crucial events of that history are the foundation of the great Benedictine, Cluniac and Cistercian monasteries throughout England, their suppression and destruction during the Dissolution of the Monasteries, and finally their revival after Catholic Emancipation in 1829 and the Restoration of the Hierarchy in 1850. The English Benedictine congregation was founded by St. Augustine of Canterbury in the fifth century, so it is very old.

As this website describes, the key to the continuity of the Benedictine order in England today is one man, Father Sigebert Buckley, who survived after the second suppression of the order at the beginning of Elizabeth I's reign. Henry VIII had suppressed the entire order and all its houses by 1540, but Queen Mary I restored the abbey at Westminster as a royal foundation:

Queen Mary nominated to the Abbacy Doctor John Feckenham, a learned and pious monk of Evesham. He gathered round him fourteen Benedictine monks and entered into possession of his Abbey on 21 November, 1556. This revival of St Peter's lasted only two years and eight months. On 12 July 1559 the monks were driven out, and have not yet returned.

Amongst those professed by Abbot Feckenham was Father Sigebert Buckley, a native of Staffordshire. He refused to take the oath of supremacy, and suffered imprisonment all during Elizabeth's reign. At the accession of James I, he was released from the prison of Framlingham. In the same year 1603 two English monks of the Cassinese congregation, Fathers Preston and Beech, arrived at Yarmouth, and found Father Sigebert in the house of Mr Francis Woodhouse. The 86 year old Confessor of the Faith was willing and anxious to pass on at once the habit and the succession of Westminster.

How to do this legally caused a delay of four years. The difficulty was at last overcome by a young lawyer of Abergavenny who had gone to Italy to fulfil a vow and had returned a Benedictine monk. Br Augustine Baker drew up a legal instrument for the aggregation and succession which satisfied all ecclesiastical law. It is said that it was a secular priest, Arthur Pitts, an exile in Lorraine, who recommended Sadler and Maihew to receive the succession of Westminster.

According to my categorization of the different causes of martyrdom during and after the Long English Reformation, Benedictines suffered as Supremacy Martyrs during the reign of Henry VIII, as Recusant Martyrs during the reigns of Elizabeth I, James I and Charles I, and one as a Popish Plot martyr during the reign of Charles II.
The Benedictine Supremacy martyrs are:
Blessed John Beche, Abbot of Colchester, 1 December 1539
Blessed Hugh Faringdon, Abbot of Reading, 14 November 1539
Blessed Richard Whiting, Abbot of Glastonbury, 15 November 1539
Blessed John Rugg, 15 November 1539
Blessed John Thorne, 15 November 1539
(All beatified on 13 May 1895 by Pope Leo XIII)
The Benedictine Recusant martyrs are:
St. John Roberts, 10 December 1610
St. Alban Bartholomew Roe, 21 January 1642
Blessed Mark Barkworth, 27 February 1601
Blessed George Gervase, 11 April 1608
Blessed Maurus Scott, 30 May 1612
Blessed Philip Powell (sometimes spelled Philip Powel), 30 June 1646
(The first two canonized in 1970 by Pope Paul VI, the others beatified either by Pope Pius XI on 15 December 1929 or Blessed John Paul II on 22 November 1987)
The Benedictine Popish Plot martyr is:
Blessed Thomas Pickering, 9 May 1679 (Benedictine lay brother) (Beatified by by Pope Pius XI on 15 December 1929)

Email ThisBlogThis!Share to TwitterShare to FacebookShare to Pinterest
Labels: Benedictine Martyrs, Benedictines, Monasticism in England, St. Benedict, The Dissolution of the Monasteries