St. Robert Bellarmine and the Declaration of Independence 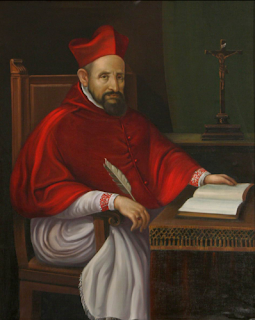 Matthew Bunson, formerly editor of OSV's The Catholic Answer Magazine, writes now for EWTN's National Catholic Register. One of his first contributions is this editorial:

On the day that the Continental Congress approved its resolution for independence for the American colonies, July 2, 1776, John Adams wrote Patrick Henry, “The decree is gone forth, and it cannot be recalled, that a more equal liberty than has prevailed in other parts of the earth must be established in America.”

The formal Declaration of Independence that was approved two days later was a masterful statement of the rights of men in an age of royal absolutism.

It also had deep Catholic roots.

At a time when many Americans have lost touch with both the historical and philosophical foundations of the United States, Independence Day — July 4th — is always a good opportunity to reflect on the particular genius of our Founding Founders and the influences that shaped their thought and actions.

But any discussion of genius and influence must include two names, one the author of the Declaration of Independence and the other a doctor of the Church.

Thomas Jefferson is honored rightly as one of the greatest minds in American history, who bequeathed to his country a statement of principles that began the extraordinary experiment of the American republic. It is surprising to learn, then, that a careful study of the Declaration reveals striking parallels between Jefferson’s eloquent appeal to the unalienable rights of men and self-determination and the Church’s teachings on the human person and a properly ordered society. In fact, nearly two centuries before Jefferson, his very same ideas were written by a Counter-Reformation Catholic of equal genius: the Jesuit theologian, saint, cardinal and doctor of the Church Robert Bellarmine (1542-1621).

Bunson then compares Bellarmine's De Laicis on civil government and some passages in the Declaration of Independence and notes that Jefferson indeed know of St. Robert Bellarmine's ideas because he read Patriarcha: The Naturall Power of Kinges Defended Against the Unnatural Liberty of the People, By Arguments, Theological, Rational, Historical and Legall by Robert Filmer, a Protestant theologian defending King James I's idea of the Divine Right of Kings.

Email ThisBlogThis!Share to TwitterShare to FacebookShare to Pinterest
Labels: King James I, St. Robert Bellarmine, The Declaration of Independence, the Divine Right of Kings, Thomas Jefferson