The End of the Fortnight for Freedom 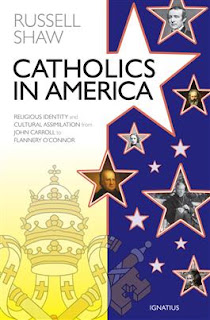 Three years ago, I reviewed a book by Russell Shaw on this blog:

American Church: The Remarkable Rise, Meteoric Fall, and Uncertain Future of Catholicism in America surveys recent history as a personal memoir, analyses the efforts of late nineteenth and early twentieth century Church leaders to chart a path for Catholics in America, and provides some ideas to strengthen Catholic culture in America, ideas which build on movements and efforts already in place. The first several pages of this book presented some confusion as evidently Ignatius Press had changed the title of the book sometime after the text was printed and bound. The original title was "The Gibbons Legacy" and therefore the Foreword by Archbishop Chaput and the Introduction kept mentioning that title. . . . I presume Ignatius and Shaw changed the title because of concern no one knows who "Gibbons" was--James Cardinal Gibbons, the ninth Archbishop of Baltimore (from 1877 to 1921). . . . Shaw's book traces the path of assimilation of Catholics in American culture--and as that culture became more and more secularized, then Catholics on that path became more and more secularized. Then he addresses, often from personal experiences, the effects of the implementation of the "spirit of Vatican II", changes in Catholic higher education, reform movements in the episcopacy--and he uses his personal recollections well, without falling into the trap of becoming anecdotal. . . .Overall, the story Shaw tells is sad--how the Church lost its influence on American culture because it tried to assimilate too much into American culture. Shaw's hope for the restoration of that influence is in the development of a Catholic subculture, which I think exists--EWTN, Catholic bloggers, the Fellowship of Catholic Scholars, the youthful pro-life movement--and I think will remain small. Primarily, I think Shaw is correct that it is the formation of the laity, as inspired by the documents of the Second Vatican Council that is most important--instead of pursuing "ministries" inside the Church, we should be working to influence our culture--exactly through the sub-culture Shaw outlines. Perhaps the institutional Church should not aspire to the great influence of former days as it may come at the same cost of assimilation or accommodation. Thought-provoking, to say the least.

Now he has followed up on that book with Catholics in America: Religious Identity and Cultural Assimilation from John Carroll to Flannery O'Connor and he writes about this new book for The Catholic World Report (adapted from the Introduction):

A collection of fifteen profiles of prominent individuals, it can be read simply as a set of introductions to people who in various ways made significant contributions to American Catholicism and American society. But a more complex rationale is also at work—the hope to stimulate an overdue dialogue on an urgent matter: Can we really be fully Catholic while also being fully American in American secular terms?

As it stands, many Catholics take for granted their assimilation into the values and behavior patterns of the surrounding society. But for a significant remnant of believing, practicing Catholics, it’s a different story. Finding themselves increasingly alienated from the secular society, they are deeply concerned to know what to do about it. They may find some help in this book.

Several themes are at work here. For example: Archbishop Carroll and Cardinal Gibbons—the assimilation option as it has been accepted and promoted by leaders of the Church in the United States; St. Elizabeth Seton, Father McGivney, and Al Smith—anti-Catholicism and the Catholic response; Archbishop Hughes and St. Frances Xavier Cabrini—the immigrant experience; Cardinal Spellman—hyper-patriotism as an assimilation mode; Dorothy Day, Archbishop Sheen, Flannery O’Connor—the ambiguities of American culture; Orestes Brownson and Isaac Hecker—the feasibility of evangelization; John Kennedy and John Courtney Murray—resolving the tension between church and state.

It’s important to say this is not an unpatriotic book. “My country, right or wrong”—words linked to the American naval hero Stephen Decatur and later repeated, with disastrous results, by Cardinal Spellman—expresses an unassailably correct sentiment, provided the sentiment is understood to be: “No matter how foolishly or unjustly my country may act, it’s still my country.” But acknowledgment of national filiation does not excuse patriotic citizens from criticizing their country when it acts foolishly or unjustly, and trying their best to get the country to stop doing that. Criticism in these circumstances is an expression of patriotism—indeed, one far more useful than blind acquiescence.

I always think of "love of country" or patriotism as being like the love I have for my parents. I know they were not perfect parents or people (my father has been dead six years and my mother is in a nursing home) but I also know they gave me life, loved me, and raised me and I love them.

Happy Independence Day! By the way, my parents met on the 4th of July on a blind date and there were fireworks because it was love at first sight!
Posted by Stephanie A. Mann at 12:30 AM