The article I wrote for OSV'S The Catholic Answer Magazine on the Gorkum Martyrs was illustrated with the same picture as the cover of this book, which includes a chapter on their martyrdom and beatification. The painting is by Cesare Fracassini (1838-68) who was, according to this blog,

from Orvieto, another pupil of Tommaso Minardi


When this painting was shown for the first time in the studio of the artist, more than 20,000 people flocked to admire it

According the Wikipedia entry, Fracassini

executed several frescoes for San Lorenzo fuori le Mura. He lived alongside the painter Cesare Mariani as a young man. He often collaborated or obtained commissions with his friend Paolo Mei, as well as a colleague of Guglielmo de Sanctis and Bernardo Celentano. . . .

He painted a St Jerome for the church of San Sebastian on via Appia. He also painted a Daphne and Chloe for an exposition in Florence. He painted the curtain or sipario for the Teatro Argentina in Rome with Numa takes the counsel of the Egerian Nymph. He painted a large canvas of Apollo and Phaeton with the Solar chariot, among others for the theater, and also painted a sipario [the curtain?] for the theater of Orvieto. He was commissioned to paint a number of canvases for the decoration of San Lorenzo fuori la Mura. Fracassini was admired for his speed of painting. 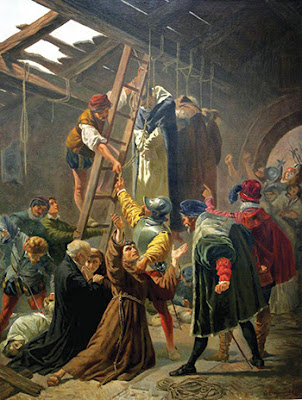 The painting is now hung in the Sala Sobieski in the Vatican Museums. The Sala Sobieski commemorates the victory of the Polish King John III Sobieski over the Turks after the siege of Vienna in 1683.
Posted by Stephanie A. Mann at 1:00 AM

Email ThisBlogThis!Share to TwitterShare to FacebookShare to Pinterest
Labels: Cesare Fracassini, martyrs of the Wars of Religion, paintings, the Gorkum Martyrs, the Vatican Museums