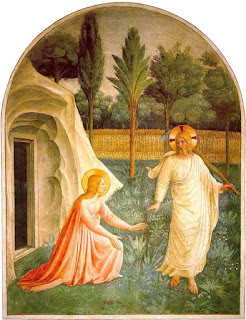 Saint Mary Magdalene is my confirmation saint. I attended the School of the Magdalen here in Wichita and the sisters were thrilled by my selection, except that I really chose the name to honor the grandmother I never knew. She had been raised Catholic but had left the Church. Personally, I am pleased that Pope Francis has raised St. Mary Magdalen's feast day to the level of a Feast (not just a Memorial). That means that the "Gloria in exclesis deo" will be sung or recited at Mass today and there is even a special Preface (before the Sanctus and the Canon).

When announcing the change, the Secretary of the Congregation for Divine Worship and the Discipline of the Sacraments, Archbishop Arthur Roche commented on the reasons and the timing:

Archbishop Roche drew attention to the fact Mary Magdalene was the first witness to the Resurrection, and is the one who announced the event to the Apostles.

“Saint Mary Magdalene is an example of true and authentic evangelization; she is an evangelist who announces the joyful central message of Easter,” he writes.

“The Holy Father Francis took this decision precisely in the context of the Jubilee of Mercy to signify the importance of this woman who showed a great love for Christ and was much loved by Christ,” writes Archbishop Roche.

He also notes Saint Magdalene was referred to as the "Apostle of the Apostles" (Apostolorum Apostola) by Thomas Aquinas, since she announced to them the Resurrection, and they, in turn, announced it to the whole world.

Dorothy L. Sayers clearly identifies with the women of the Gospels who are drawn to Jesus. In her radio play-cycle, The Man Born to Be King, Sayers identifies Mary of Bethany as Mary Magdalen as the woman who washes Jesus's feet with her tears in the house of Simon the Zealot. There are some controversies here, as Scott Hahn describes in his Dictionary of the Bible (Doubleday, 2009):

Tradition often identifies Mary Magdalene either with the sinful woman who anointed Christ's feet in Luke 7:36-50 or with Mary of Bethany, the sister of Lazarus and Martha mentioned in Luke 10:38-42 and John 11-12. By the sixth century A.D., figures such as Gregory the Great had begun to advance the notion that these two women mentioned in Scripture were one and the same person: Mary Magdalene, who hailed from Bethany and who had become a disciple of Jesus after leading a notoriously sinful life. This tradition explains why Mary Magdalene was revered for centuries as the "model penitent." From a biblical standpoint, it is not impossible that Mary Magdalene could be identified with either one or both of these two women, but decisive evidence is lacking and so it must remain uncertain.

In "The Human Not Quite Human" Sayers writes that it's

no wonder that the women were first at the Cradle and last at the Cross. They had never known a man like this Man—there never has been such another. A prophet and teacher who never nagged at them, never flattered or coaxed or patronized . . . who rebuked without querulousness and praised without condescension . . . who . . . never urged them to be feminine or jeered at them for being female . . . who took them as he found them and was completely unselfconscious.


Then in “The Light and The Life,” the 7th play from The Man Born to Be King cycle, Sayers dramatizes this great attraction in a scene set at Bethany in the home of Lazarus, Martha, and Mary. Mary remembers how Jesus forgave her, referring to Luke 7:36-50:

MARY: I love the wrong things in the wrong way—yet it was love of a sort . . . until I found a better.

JESUS: Because the love was so great, the sin is all forgiven.

MARY: Kind Rabbi, you told me so, when I fell at your feet in the house of Simon the Pharisee. . . . Did you know? My companions and I came there that day to mock you. We thought you would be sour and grim, hating all beauty and treating life as an enemy. But when I saw you, I was amazed. You were the only person there that was really alive. The rest of us were going about half-dead—making the gestures of life, pretending to be real people. The life was not with us but with you—intense and shining, like the strong sun when it rises and turns the flames of our candles to pale smoke. And I wept and was ashamed, seeing myself such a thing of trash and tawdry. But when you spoke to me, I felt the flame of the sun in my heart. I came alive for the first time. And I love life all the more since I have learnt its meaning.

JESUS: That is what I am here for. I came that men should lay hold of life and possess it to the full.

Let us pray: O God, whose Only Begotten Son entrusted Mary Magdalene before all others with announcing the great joy of the Resurrection, grant, we pray, that through her intercession and example we may proclaim the living Christ and come to see him reigning in your glory. Who lives and reigns with you in the unity of the Holy Spirit, one God, for ever and ever. Amen.
Posted by Stephanie A. Mann at 12:30 AM