The Fortnight for Freedom: July 1 at the Tower and at Tyburn

Today is the first Friday of the month, so my husband and I will attend Noon Mass at the Cathedral of the Immaculate Conception here in Wichita, with 30 minutes of Adoration after Mass and Benediction. The Cathedral has hosted 24 hours of Adoration and Confession for the First Fridays during the Year of Mercy. Since this First Friday is during the Fortnight for Freedom, there is much to meditate on, particularly these three anniversaries:

Even though More tried one last time to defend himself, he was sentenced to the execution meted out for traitors:


That he should be carried back to the Tower of Lon­don, by the Help of William Kingston, Sheriff, and from thence drawn on a Hurdle through the City of London to Tyburn, there to be hanged till he should be half dead; that then he should be cut down alive, his Privy Parts cut off, his Belly ripped, his Bowels burnt, his four Quarters sit up over four Gates of the City: and his Head upon London-Bridge. 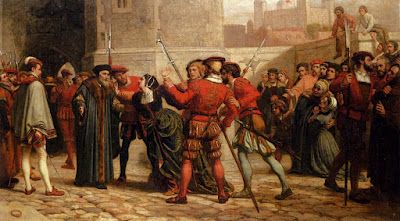 His daughter Margaret met him on the way back to the Tower of London.

II. Also, on July 1 in 1616, Blessed Thomas Maxfield was executed at Tyburn:

On Wednesday, 26 June, he was brought to the bar at the Old Bailey, and the next day was condemned solely for being a priest, under 27 Eliz., c, 2. The Spanish ambassador did his best to obtain a pardon, or at least a reprieve; but, finding his efforts unavailing, had solemn exposition of the Blessed Sacrament in his chapel during the martyr's last night on earth. The procession to Tyburn early on the following morning was joined by many devout Spaniards, who, in spite of insults and mockery, persisted in forming a guard of honour for the martyr. Tyburn-tree itself was found decorated with garlands, and the ground round about strewn with sweet herbs. The sheriff ordered the martyr to be cut down alive, but popular feeling was too strong, and the disemboweling did not take place till he was quite senseless.

He was beatified by Pope St. John Paul II as one of the 85 Martyrs of England and Wales. 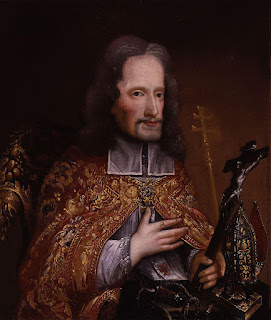 III. Finally, on July 1 in 1681, St. Oliver Plunkett was the last Catholic priest executed at Tyburn Tree; he was the last victim of the Popish Plot's anti-Catholic, anti-Jesuit hysteria to be executed--but he was not a Jesuit, nor an English missionary priest. St. Oliver Plunkett was the Archbishop of Armagh, the Primate of Catholics in Ireland. He was the ultimate bogey-man to the Anglicans of England, for he was the embodiment of Catholic resistance to English rule in Ireland and all the English attempts, from Elizabeth I's reign, to bring Catholic Ireland under Anglican rule. He was tried twice on charges of conspiracy against Charles II--once in Ireland where he was acquitted and again in England where he was found guilty. He could not be found guilty for being a priest in England under the old Elizabethan statute since he had been brought to England by authorities, and there was no real proof of any conspiracy with the French to overthrow Charles II, but he was still found guilty and the sentence carried out:

On the 1st July 1681, he was dragged on a sledge from Newgate prison, before a noisy crowd, a distance of three kilometers to Tyburn. The keeper of Newgate when asked how the prisoner was, replied that he had slept soundly and that he was as unconcerned as if he was going to a wedding. From the three cornered gallows at Tyburn, Archbishop Oliver in a prepared speech, refuted his accusers point by point and forgave all of them, including the judges, and those who had given evidence against him at the trial: "I beg of my Saviour to grant them true repentance, I do forgive them with all my heart."

Oliver's theme of reconciliation continued, by his asking forgiveness of all those whom he had ever offended by thought, word or deed. He prayed: "I beseech your Divine Majesty by the merits of Christ and the intercession of his Blessed Mother and all the holy angels and saints to forgive me my sins and to grant my soul eternal rest."

Kneeling he recited an act of contrition, the Miserere psalm and he repeated before his death, the prayer of Jesus on the cross: "Into Thy hands, O Lord, I commend my Spirit". St. Oliver worked tirelessly as Archbishop for ten years, paying the ultimate price of martyrdom without seeing the fruits of his labours, and his crowning glory was the manner of his death, humble, heroic and holy. Several priests were close by and they blessed and absolved him at the point of his death. He may have been already dead when he was taken down and the further mutilation began. A fire had been prepared to consume his remains, his head was thrown into it, but it was quickly recovered and scorch marks may still be discerned on the left cheek. His demeanour and his speech from the scaffold were well received and it was patently obvious to many that he was innocent, as the plot had already shown signs of crumbling.

Charles II knew that Archbishop Plunkett was being framed but he did nothing because it was not politically expedient to protect a Catholic priest from injustice. The Lord Lieutenant of Ireland and Earl of Essex, Arthur Capell, recognized the injustice of Plunkett's trial, conviction, and execution and Charles excoriated him: "his blood be on your head - you could have saved him but would not, I would save him and dare not". Oliver Plunkett was beatified by Pope Benedict XV and Pope Paul VI canonized him in 1975.
Posted by Stephanie A. Mann at 12:30 AM